An elderly woman and her son have attended church where I serve for a few weeks. They always leave very quickly, such that I've never really be able to meet them. She comes up for communion with the help of someone in the congregation, but he stays behind in the pew.

She receives the bread and doesn't eat it. A couple weeks ago, the congregation member who had helped come up waved me over and asked to give her a blessing. The older woman said her name, which I thought was French. Conjugating quickly in my head, I said, "Dieu vous donne la paix." She smiled gently at me and I felt successful.

This week, at the beginning of the service, they were back. I looked at the younger man and asked "En francais?" He said, "No, she speaks German."

During the passing of the peace, I went back to him and asked about communion. Knowing I hadn't been speaking the right language, I asked him about the bread issue. He confided that she actually struggled with Alzheimer's, so she wasn't entirely sure what was happening. "Thank you for tolerating her," he concluded.

"Oh, no," I protested. "We aren't tolerating anyone. It's an open table for everybody, no matter what they understand. Besides, no matter what she forgets, God remembers her."

His face reddened and his eyes watered as he thanked me. I felt intensely emotional.

During the offering, I used my cell phone to Google how to say some kind of blessing. The words for "The body of Christ broken for you" were beyond my pronunciation. The smile she gave told me she'd understood what I'd gotten out. 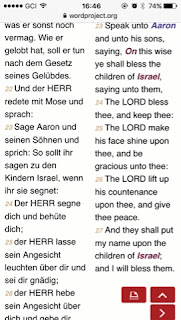 During the last hymn, I googled "German English Bible". Word project.org offered me the page you see here in a side-by-side translation. I knew if I could find that, I could find the Aaronic blessing from Numbers 6 and offer at least a line of it.

I think it's really important for anyone visiting a church to hear a least one line in their own language. No church is likely able to offer a complete translation of anything to a new visitor. If you don't usually have non-English speaking visitors, you may not even have materials available in another language. Nevertheless, it is hospitable, kind, and generous to offer something in a language that a visitor or newer member can understand. Particularly in the case of older people or people who have difficulty processing information, words in a childhood language or song may be the most comforting thing they could hear. I've greeted people in French (correctly) and offered the Holy Communion dialogue in American Sign Language before.

At the end of the service, I spread wide my right arm and clearly announced, "Der HERR segne dich und behüte dich." Before the sound had fully died, the face of the woman at the back of the church was transformed. She lit up and grinned so broadly I could see her teeth. She heard. She understood. She felt the blessing.

I offered the full blessing- intercession, request, and promise- in English.

I will always remember how Google, my worship assistant, actually allowed me to see the blessing of Aaron take root in a woman who just wanted to feel- even briefly- welcome and at home.
Posted by Pastor Julia at 7:12 PM

Your thoughtfulness and your speed with the IPhone impress me often. Thanks for sharing this to remind me to make extra efforts to be welcoming.

Oh Julia,
This is so so beautiful.
Thank you. What a deep and honoring pastor you are!