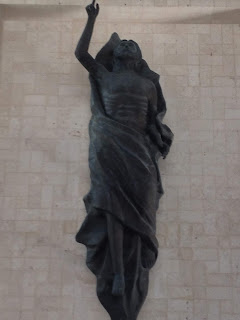 Now things are getting scary. It’s hard to untangle meaning from these passages that tell about death and destruction coming from heaven. Not only do such passages seem to contradict the over-arching biblical theme of God’s mercy and desire for peace, but these passages also sew seeds of doubt in the heart of many who read them. “Am I in danger?”

Let’s deal with those two things separately, shall we? Firstly, what is the purpose of angels in most of scripture? They are created beings, like humans, but they do not live on the same plane as human beings and they appear to have different work than human beings do. In writing to the Corinthians, the apostle Paul has an awareness that those who follow the Lord will participate in the judgment of the world, including judging the angels.

Thus, when angels appear to be destructive, it does come from a heaven-sent directive. That being said, if the main work of angels is usually protective, instructive, and encouraging- it is possible to see “destructive” work as a withholding of their power, rather than unleashing it to a hard end.

Can I say this in a simpler way? I’ll try. Since much of Revelation is unveiling the results of human habits- wrong worship, oppression, failure to care for others and the world that God made- the destruction that we see at the hands of the angels may be caused because the angels are no longer intervening for the sake of the world. If the heavenly host stops doing their work, who knows what life in this realm might be like?

Thus, John’s vision indicates that the trauma and pain that is happening to those in the Roman Empire is not because heaven is causing it to happen, but because heaven is no longer intervening to stop the full extent of destruction that humans cause to one another and the earth.

As for the second question, should a believer be afraid? No. The early part of this book, as well as the rest of it, along with the whole Bible, indicates clearly God’s saving power and intentions. Those who are walking in the Way of Christ- in word and deed- have nothing to fear. They may struggle because others do not understand their commitments, but their eternal rest is secure because of Jesus. So, as the angels say, do not be afraid.

Potential takeaways: Pain and destruction in the world are not necessarily God “teaching people a lesson”. It may be the result of peoples’ choices and actions. When we who trust in God see these things, we are to lift up our heads, continue to speak peace, and work for the sake of our neighbors in generosity and kindness.

Holy God, You have given angels work that is beyond my understanding. They are charged with the care of much. You have also given me work to do in my family, my neighborhood, and in the world. Guide all Your servants in the work you have put before us that we may do that which pleases You and brings peace to Your creation. Amen.
Posted by Pastor Julia at 10:49 AM