This Week in Reading

I am planning to finish these 3 books in the next 5-6 days. I will comment on all of them in one way or another! 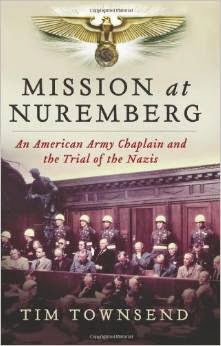 From Barnes and Noble:

The gripping story of the American army chaplain sent to save the souls of the Nazis incarcerated at Nuremberg
Lutheran minister Henry Gerecke was fifty years old when he enlisted as an army chaplain during World War II. As two of his three sons faced danger and death on the battlefield, Gerecke tended to the battered bodies and souls of wounded and dying GIs outside London. But at the close of the European theater, with Hitler defeated and scores of American troops returning home to resume their lives, Gerecke received his most challenging assignment: he was sent to Nuremberg to minister to the twenty-one imprisoned Nazi leaders awaiting trial for crimes against humanity.
A crucial yet largely untold coda to the horrors of World War II, Mission at Nuremberg unearths groundbreaking new research and compelling firsthand accounts to take us deep inside the Nuremberg Palace of Justice, into the very cells of the accused and the courtroom where they answered to the world for their crimes. Never before in modern history had man accomplished mass slaughter with such precision. These twenty-one Nazis had sat at the right hand of Adolf Hitler; Hermann Goering, Albert Speer, Wilhelm Keitel, Hans Frank, and Ernst Kaltenbrunner were the orchestrators, and in some cases the direct perpetrators, of the most methodical genocide in history.
As the drama leading to the court's final judgments unfolds, Tim Townsend brings Henry Gerecke's impossible moral quandary to life: How, having risked his own life (and those of his sons) to eliminate the Nazi threat, could he now win the confidence of these men? In the months after the war ended, Gerecke had visited Dachau. He had touched the walls of the camp's crematorium. He had seen the consequences of the choices these men had made, the orders they had given and carried out. As he worked to form compassionate relationships with them, how could he preach the gospel of mercy, knowing full well the devastating nature of the atrocities they had committed? And as the day came nearer when he had to escort these men to the gallows, what comfort could he offer—and what promises of salvation could he make—to evil itself?
Detailed, harrowing, and emotionally charged, Mission at Nuremberg is an incisive new history of the Nuremberg trials as well as a nuanced reflection on the nature of morality and sin, the price of empathy, and the limits of forgiveness. 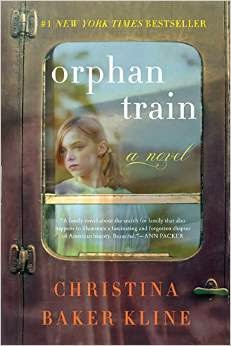 Reading for personal book club (selected by someone else):

From Barnes and Noble:


The runaway bestseller that has swept the nation, with more than one million copies sold
Between 1854 and 1929, so-called orphan trains ran regularly from the cities of the East Coast to the farmlands of the Midwest, carrying thousands of abandoned children whose fates would be determined by luck and chance.
This is the story of one such child.
As a young Irish immigrant, Vivian Daly was sent by rail from New York City to an uncertain future a world away. Returning east later in life, Vivian leads a quiet, peaceful existence on the coast of Maine. But in her attic, hidden in trunks, are reminders of a turbulent past.
Seventeen-year-old Molly Ayer knows that a community-service position helping an elderly widow clean out her attic is the only thing keeping her out of juvenile hall. But as Molly helps Vivian sort through her keepsakes and possessions, she discovers that she and Vivian aren't as different as they appear. A Penobscot Indian who has spent her youth in and out of foster homes, Molly is also an outsider being raised by strangers, and she, too, has unanswered questions about the past.
Moving between contemporary Maine and Depression-era Minnesota, Orphan Train is a powerful tale of upheaval and resilience, second chances, and unexpected friendship. 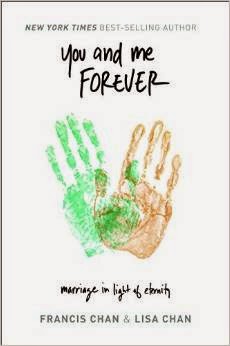 Received copy for review for RevGalBlogPals.org

Marriage is great, but it's not forever. It's until death do us part. Then come eternal rewards or regrets depending on how we spent our lives.In his latest book, Francis Chan joins together with his wife Lisa to address the question many couples wonder at the altar: How do I have a great marriage? Setting aside typical topics on marriage, Francis and Lisa dive into Scripture to understand what it means to have a relationship that satisfies the deepest parts of our souls.In the same way Crazy Love changed the way we saw our personal relationship with God, You and Me Forever: Marriage in Light of Eternity will radically shift the way we see one of the most important relationships in our life.Jesus was right. We have it all backwards. The way to have a great marriage is by not focusing on marriage.  Whether you are single, dating or married, You and Me Forever will help you discover the adventure that you were made for and learn how to thrive in it.100% of the net profits from You and Me Forever: Marriage in Light of Eternity will go towards providing food, shelter and rehabilitation for thousands of orphaned children and exploited women in partnership with global charities.


What are you reading this week?