This review was first posted on 11/24/14 at RevGalBlogPals.org.


In the next six months, you will need to buy a present for someone. This person may be easy to buy for or kind of tricky. He or she might be religious, but persnickety about religiously themed books or movies. She might be a World War II buff, but who already seems to have/know everything. He might be a voracious reader of generalized military history, yet shies away from specific biographies. The person you know may have loved Unbroken (Hillenbrand) and wants to read something similar, but despairs of finding such a book.

Good news, friend! I have the book for this person, this situation, your (advanced) church book group, and maybe for you. Mission inNuremberg: An American Army Chaplain and the Trial of the Nazis by Tim Townsend is just waiting for you to buy one or two copies, read, and distribute. Frankly, I’m a voracious reader, consuming quickly and without discrimination. I dove into this book 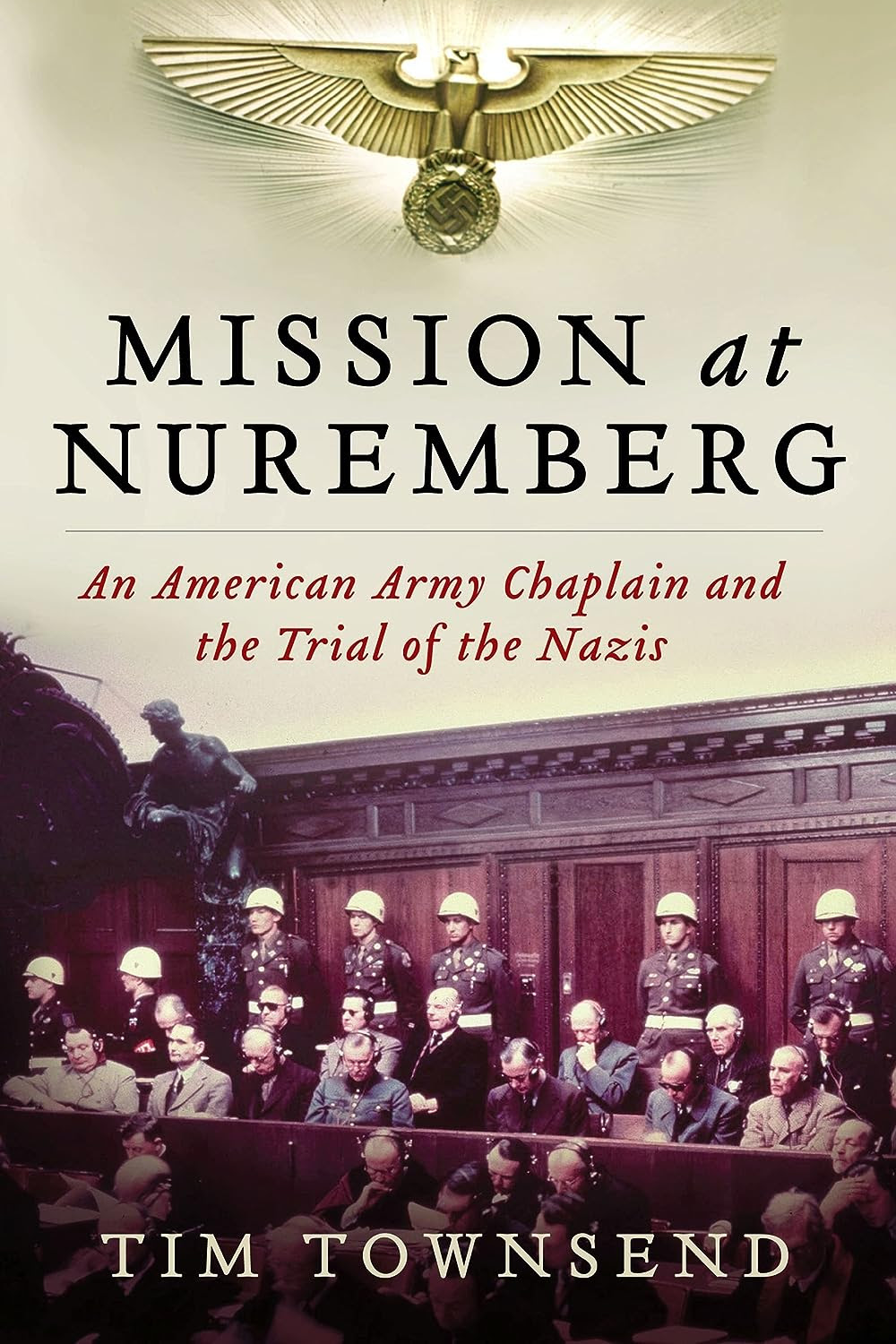 and then I slowed, pacing myself.

Townsend, without directly saying so, tackles the perennial and omnipresent question of theodicy by pointing out that “Why” is the wrong question. There is only futility in persistently beating your head against a marble wall. The question to ask with regard to the presence of good and evil in the world is, “What do I do about it?” In so asking, the wall yields and there is an orchard of tender fruit to be harvested, handled carefully, and prepared so as not to poison, but to nourish.

Henry Gerecke (rhymes with “Cherokee”) is a pastor, Lutheran Church-Missouri Synod, in St. Louis in the 1920s and 30s. He is a very “successful” parish pastor, but he feels called to specific mission work with the poor and downtrodden of his town. Where there are people struggling with physical, spiritual, and emotional needs- Gerecke sees Jesus and finds his own sense of call there. In the midst of this necessary work, even during the Depression, Gerecke signs up for the Army Chaplain Corps just before his 50th birthday, so that he may be of service during World War 2.

The book flashes back and forth between Gerecke’s specific life and details and then the larger world situation. The world building is necessary because it enables the reading to understand the scope of the trauma, drama, and mixed emotions that occur for a chaplain, and his soldiers, during a war. Gerecke’s original attachment found him serving on hospital grounds in southern England- funneling soldiers and POWs from mainland Europe, through triage at the hospital, and then on to specialty hospitals, back to the front, to prisons, or to convalescence from there. Gerecke is with the wounded, the dying, and the shell-shocked. He throws himself so fully into this ministry that even the most spiritually hardened reader immediately feels thankful to God for the chaplain’s life and call.

Gerecke’s dedication earns him attention he deserves. It also leads to his specific request and call, after the war ends, to serve as a chaplain at Nuremberg. Gerecke will be chaplain to the Protestant Nazis who are to be tried at the first and most famous Nuremberg trial, that of the Major War Criminals. Gerecke will be the pastor to and for such men as Hermann Goering, Wilhelm Keitel, and Albert Speer.

Here is the heft of this book- what does it mean to pastor a person who has committed something atrocious? As the rest of the world had the time to ponder “Who could do these things” as the revelations of Nazi actions came to light, Gerecke had to swallow that question for himself and ask, “How I help these men return to their Creator and Redeemer?” Gerecke’s specific understandings of scripture, the sacraments, and God’s eternal invitation are crucial pieces to how he not only did this work, but in underscoring why he thought it mattered.

This book is deeply emotional. I usually include little excerpts in my reviews of things that stayed with me, yet my notes in this book do not lend themselves to excerpting. Townsend has some deep reflections on what it means to understand evil as an absence of good, but with no power of its own. His discussion of the “mark of Cain”- as either a sign of a murderer or a reminder of God’s protection is riveting. Make no mistake, though, this is not an easy book to read. The chapter entitled “The Book of Numbers” is as difficult to read as its biblical counterpart. If the reader only has passing familiarity with the specifics of the activities in and around the death camps, particularly Mauthausen, this chapter proves a swift, abrupt, and raw education.

Who can forgive? One never gets the sense that Gerecke perceived himself to have the right or the power to forgive the actions of the Nazi war criminals who composed his tiny flock. Townsend’s contemplation of the nature and essence of forgiveness, and to whom it belongs, frankly, is a must read for any adult education class of any denominational stripe.

We live in a state of almost permanent conflict. War may never be explicit and yet the machinery of war- the weapons, the plans, the people- are always in motion, in preparation, and in action. There are those among us who pay a huge cost for that perpetual crisis situation. Mission at Nuremberg, at its very best, causes the reader not to reflect on the atrocities of specific Nazi leaders, but instead to consider what it means to understand each body in the world as a person- a child of God- with a desire to live, to matter, and to love and be loved.

What are the dynamics of justice- punishment, pardon, and peace- when we keep those thoughts at the front of our mind? After all, we will not know in our lifetime the “why” of good and evil, but we can daily answer “What shall I say” in the face thereof. In Mission at Nuremberg, Chaplain Henry Gerecke is the first among equals as an example for how to respond to that question.
Posted by Pastor Julia at 11:52 PM