A Fable for Your Consideration

A fable is a short story or piece of writing meant to convey a moral lesson. 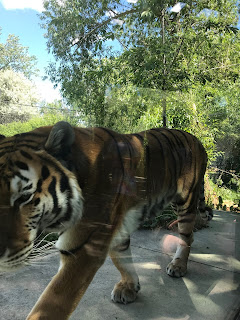 
Once there was a tiger. This tiger had always lived in the forest. The tiger roamed, preyed on smaller animals, and generally did tiger things. While no animals attempted to befriend the tiger, most also were not unduly scared of him.

It did not seem to matter that there were field mice born in tree trunks and in old nurse logs. The tiger had spoken. Other predators in the forest agreed that the field mice should go. They bring disease, some animals noted, truthfully, forgetting how many other animals transmitted illness from one to another. They eat food that should be ours, said the smaller critters. The foxes didn't want to contradict the tiger, but they did need the mice for their diets. They began to eye the birds' nests. Some animals, like the deer, didn't necessarily want to get rid of the mice, but they didn't want to be in the fight, so they said nothing.

The tiger patrolled the edges of the forest and the mice who could fled. Those who couldn't get out for one reason or another burrowed in more deeply, now more terrified and vulnerable than ever.

After the mice were banned, the tiger demanded that rabbits and weasels must go. They are too small, roared the tiger, and small means inconseqential! The tiger presided over the forced evacuation of the rabbits and the weasels. Some of the other predators became concerned because now there was very little food for them in the forest itself. The tiger's roar, however, was terrifying and no one dared to point out the flaws in the plan or maybe that mistakes had been made.

One morning, all the deer fled. They ran through several fields to a different wood, removing themselves from the tiger's reign.

All that remained in the tiger's forest were the tiger and other predators. Things became tense in the forest. Many animals, especially the scavengers, had to travel far each day to collect food and then bring it home to their dens and their children. The wolves and the bears were particularly exhausted as the constant hunt prevented them from storing their winter fat.

The tiger killed all the foxes. I wanted a fox fur coat, he said, as he patrolled, draped in the bloody hides. He glared at everyone he passed and the animals ducked their heads and busied themselves with various tasks.

No one dared to cross the tiger.

There were quiet rumors of meetings of dissenters, potential plots to overthrow the tiger or end his reign, some grumblings if one was sure he wasn't there.

But no one stood up to the tiger.

It was hoped that perhaps, with so few animals left, animals that shared much taxonomy with the tiger, perhaps they would be safe.

The badger, with a bellyful of roots, waddled back to his burrow late one evening. Roots and the occasional grub were not as satisfying as a dinner of mice or perhaps a rabbit, but it would do.

Suddenly, the badger found himself flipped over, staring at the sky. The tiger loomed above him, one paw raised high.

"Why?" said the badger, knowing this was the end.

"Because I can," laughed the tiger, slashing the badger's throat. "I didn't spare anyone else. Why would you think I cared about you?"

Moral: When the tiger shows you his stripes, believe that he is a tiger.

One of many reasons why I think you're awesome.
Thanks for this post. Pertinent this side of the Pond given the new Prime Minister and the Cabinet of horror that he's assembling around him.