Guilt, Shame, and Ashes to Go 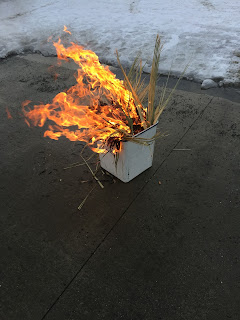 One of the struggles with Lent (and with being human) is that, in Western conversation and in spoken and written English, we have conflated guilt and shame. They are not the same. Furthermore, making them interchangeable does real spiritual and psychic harm to individuals and communities.

Regardless of official definition (denotation), the common understanding of shame (connotation) is to be embarrassed or regretful of who you are. This stems from being told or believing that bad choices or personal struggles are rooted in being a bad person. This isn't even a question of being human and, thus, prone to mistakes. In common parlance, shame is rooted, fundamentally, in being a bad person of little to no redeeming value.

When we hear people saying that people aren't "ashamed" anymore, what is usually meant is either 1)  people "like that" used to not be visible in society and I would prefer for that to be the case again OR 2) they should feel guilty for their choices or actions.

Guilt is different from shame and has a different function. Guilt is feeling bad about actions or choices. Guilt is not rooted in who you are as a person, but in the fact that you have done things that are not in keeping with who you are (or whose you are). Guilt is the feeling that arises out of regret or remorse. Often guilt makes us double-down on a choice, reiterating that we were correct in our actions- even though we doubt that ourselves. Negative choices can stem from fear, longing, grief, and frustration. We have few communal outlets for acknowledging these realities and, thus, they continue to be motivators toward negative actions, which feed guilt.

Guilt that we do not release can become shame.

Adam and Eve felt guilty because of their disobedience. The guilt grew beyond their ability to hold it in their hearts with the truth that God had made them and walked and talked with them. They then doubted who they were in that relationship and their value. In the resulting shame, they covered themselves and hid.

Ashes to Go is a Lenten practice that is embraced enthusiastically by some Christians and less so by others. Critics rightly note that Ash Wednesday seems like a poor day in the church year for evangelism, especially when Christians don't do a great job of talking about death, sin, and guilt on the other 364 days in of faithful living. True, true, true. The Church is the place where we learn to live and die in Jesus Christ. We model ourselves on his faithfulness.

When I go out, in the COLD, on Ash Wednesday to distribute ashes, I'm not thinking about evangelism in the classical, fundamentalist Christian sense. I'm not there in my robe, hoping someone will ask me about Christ, so that I can pray the "Sinner's Prayer" with them.

The reality of Ashes to Go isn't that we shouldn't be out, attempting to counter shame and relieve guilt, on this day, but that it shouldn't be the only day that we do it.

The Divine Being overflows with love for creation. We are part of that creation. Becoming rooted in that truth does not allow the weed of shame to take hold and choke out the grace of that knowledge.

Guilt has a performative function of helping us see how we have strayed from loving God, loving our neighbors, and loving ourselves. Releasing guilt sometimes requires hard work of confessing to God or to one another, reparative work, or learning new information toward a change of heart. Lent is a good time to work on releasing guilt so that we have clearer vision to celebrate the joy of resurrection at Easter.