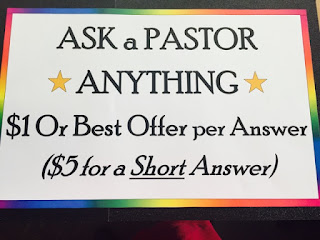 Last night, I was asked an excellent question. We read and meditated on this passage from Paul’s writing:

Someone asked, “Why does that passage talk about children like that if Jesus said we have faith like a child?”

People were bringing even infants to him that he might touch them; and when the disciples saw it, they sternly ordered them not to do it.  But Jesus called for them and said, “Let the little children come to me, and do not stop them; for it is to such as these that the kingdom of God belongs. Truly I tell you, whoever does not receive the kingdom of God as a little child will never enter it.” Luke 18:15-17

Great question! Why do we have a passage from the apostle Paul that seems to specifically contradict a teaching that we have from Jesus?

The first thing to remember is that Paul did not have written gospels to read, as far as we know. He taught from his memorization of what was handed down to him and from the leading of the Holy Spirit. The gospels are written accounts that are crafted, by inspiration, with literary skills like foreshadowing, plot, and theme.

Paul has his own rhetorical flourishes and themes. Where these things seem to contradict one another, we must always follow the guiding of Jesus. However, it is worth a closer look to see if a contradiction is truly present.

When Jesus speaks to his disciples regarding children and faith, it is important to remember that he commends a child-like faith, but not a childish faith. In this time period, children were blessings, but also non-entities. Families had many children in hopes that some would live and would be useful to the family business or farm. One hoped for the dowries that might come with daughters-in-law and worried about the dowries to provide for one’s own daughters. Children were not only not heard, but also barely seen.

Yet, outside of the legal realities, children were certainly valued. God describes the Divine nature as being like one who lifts an infant to the cheek (Hosea 11:4). And in Luke 11, Jesus acknowledges that parents want good things for their children. So, we can ascertain that children in a healthy family system were loved. Children in this circumstance have an awareness of their value. They ask questions, play without fear, and freely give and receive affection.

This is the childlike faith that Jesus holds out as an example to the disciples. In the gospels, people and created beings who are in the margins, which included children, perceive who Jesus is as the Christ. They do not fear him in this role, but are drawn to him. As the One who contains the Eternal Word that is Love, Jesus could certainly see and sense the fear, guilt, shame, and worry of adults. He saw them with love and commended them to a faith of healthy security, trust, and openness- like that of the children who sought out their Savior.

Paul, instead, is writing to the Corinthians who have habits that exemplify childish behavior. They do not share. They engage in grouping up and keeping some people out of the group. They make bad choices and defy others to correct them. They tell Paul, “You are not the boss of us.”

Paul’s great argument toward the behavior that comes with love- being loved and showing love- is a direct hit against childishness and a push toward childlike faith. Be adults, he is arguing. Stop with petty jealousies and score keeping. Don’t show off. Don’t be rude. Stop pretending you have a secret club in Jesus’ name- that’s offensive. God is the boss of you and God sees what you’re doing. And God knows you can do better!

Paul is exactly speaking against the kind of childish behavior for which loving parents correct their children, so that they will learn to leave those things behind. Regrettably, as with the Corinthians, many of us do not leave that behavior behind and adopt a more adult way of reasoning and showing love to our neighbors. However, God was not done with the church at Corinth, which is why Paul kept writing them, and God is not done with us. The Spirit still moves.

So, when we compare these two passages, it is a difference between embracing a childlike faith and rejecting childishness in faith (and faith community). This was an excellent question and an excellent thing for us to work toward on our way to Easter resurrection celebration.
Posted by Pastor Julia at 4:13 PM