A Good Yarn about Believing 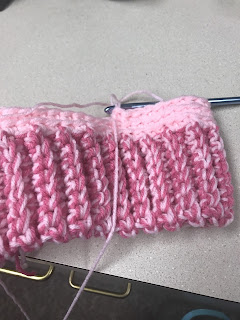 At this time four years ago, I did not know how to crochet. I was in the middle of a very dark
depression that came on about two months after V--, my youngest, was born. Each day was a effort toward my goal of "everyone alive at the end of the day". I wanted a craft to do, something that didn't involve intense focus. The only handicraft I knew at the time was cross-stitching, which is not mindless.

I had started using a knitting loom in the fall. This is a round loom with pegs around which you loop the yarn. Using a hook, you pull stitches over one another. I made a scarf for my sister and some hats. Carrying around even the small loom, though, seemed awkward. I wanted to be one of the people with a small ball of yarn and needles in my bag that I could unobtrusively pull out during a meeting.

When my mother-in-law came in June 2013 to help out while Rob went to Ft. Rucker for 13 weeks, I asked her to teach me to crochet. I knew that she knew how and that she could show me. With a hook and a ball of yarn, she showed me the stitches she knew, how to practice a chain to get tension right, adding at the end of a row to make sure the increases are correct, and how it is okay to pull out a couple rows to fix a mistake.

And, thus, a crocheter was born. I was hooked- which is a crochet pun, since that is what the crochet tool is called. In fact, I was so into crochet that I promptly went to the yarn store and crocheted a lap blanket for her before she left to go back home. In the first two months of knowing how to crochet, I made a pillow cover, a neck pillow, 10 crowns for birthday party favors, a tiny blanket for a stuffed otter, and a queen-sized blanket for my brother who moved in with us.

In the middle of my darkness, the loops and strips of yarn made me feel as though I was accomplishing something. They drew out of myself and out of my head and into a space of quieter focus and peace. I learned that crocheting during a meeting helped me to listen to others better, because it slowed down how quickly I wanted to respond.

It became easier for me to meet people because people will help a fellow crafter learn a new pattern or find a specific tool. I had a new language- hooks, gauges, swatches, stitch markers, in the round, join, increase two together, and magic circles. I had a new identity. I was a crocheter. Now, four years into that identity, my son offers my services on the playground. I've made hats for three second-graders who are not my child and I have requests for more. 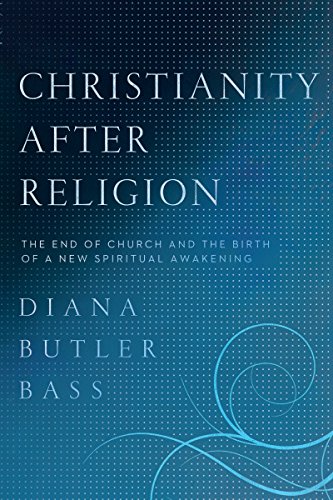 This reminds me think of a book I read in 2012, so before I became a crocheter. In Christianity After Religion: The End of Church and the Birth of a New Spiritual Awakening, Diana Butler Bass writes about how the church has a framework of believe, behave, belong.

She talks about how the model outside of church for learning a skill follows a different pattern. In the book, Bass uses the example of a person who wants to learn to knit. This person might ask someone to teach them or join a knitting group, thus seeking to belong in order to acquire the skill. Through belonging, the person learns to behave like a knitter- buying yarn, patterns, starting projects and leaving them around, and knitting. Through belonging and behaving, the person eventually becomes to believe things about knitting and knitters- about focus, skill, planning, generosity, or artistic ability. Belong, behave, believe...

Bass says, "Relationships lead to craft, which leads to experiential belief. That is the path to becoming and being someone different. The path of transformation."(201)

For a long time, people have approached being a follower of Jesus, the Way of discipleship, in the other order... with believing first, then behaving, and, after those were correct, then one could "belong". That order makes people wary of church, wary of Christians, and wary of the God who is supposedly represented by these two groups.

When we flip the order, as a community of faith and as individuals, we offer the welcome that reveals the truths that saves, the truth that welcomes, the truth that Nicodemus sought, under the cover of night. Belonging gives a sense of safety that leads to behaviors that reflect Christ's love- the love that defined his life, death, and resurrection. The ability to be part of sharing and receiving that love and welcome builds to believing, trusting in things that are beyond our full comprehension and yet we perceive that they are true.

There is a program called "Everyone Teach Two", which involves people who know how to knit or crochet teaching two other people in their life how to do it. Teaching involves inviting the person over, having a meal, talking, having a small project started, showing stitches, and praise. What if our sense of evangelism was directed in the same way? The invitation, the welcome, the hospitality, the tolerance for questions, for mistakes, for laughter and conversation- and through belonging and behaving would come belief.

In June, I'll have been crocheting for four years. In August, it will be 30 years since my baptism. I am neither the best crocheter or the best follower of Jesus, but I feel secure in belonging in both categories. I can teach two. I belong, I behave, I believe. I believe there is enough yarn to go around and that there is even more of God's love.
Posted by Pastor Julia at 2:00 PM

Thanks for sharing, Julia. I'm encouraged by your story. I have been experiencing what you are talking about in this past season of my life: belief tied to belonging. I have never been so aware of the communal nature of spirituality.