Due to having surgery this week, I'm starting a little behind on this daily devotional. I'll catch up days 1-3 at some point. See the prompts here.

Text: And he will send out his angels with a loud trumpet call, and they will gather his elect from the four winds, from one end of heaven to the other. Matthew 24:31

Yesterday, I had my uterus removed. After several years of pain and bleeding and messiness and discomfort and solutions that only created more problems, we did the thing that would make it all 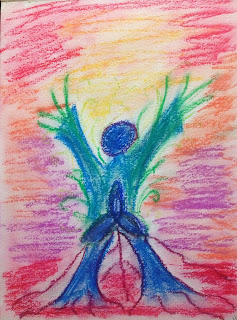 stop. We removed the source of the problem.

"Shut up" is the utterance we think of- possibly a little rude- when we want someone  or something to stop talking or making noise or creating a distraction.

I wanted my uterus to shut up. It had served its purpose for me (growing two healthy babies) and now it was dysfunctional and its noisiness was disruptive and painful.

Since I didn't often mention the pain I was experiencing and since I am only 35, people have asked if I was emotionally okay with having a hysterectomy. Was I grieving the removal of an organ that was ... was what? For me, being a woman was not tied to having a uterus, but I can see and perceive in the larger culture that ways of being are tightly defined, narrowly constrained, and the more clearly defined by parts and labels, the more comfortable most people are.

However, comfort as a noun is not something to which Christians are called to aspire. We are called to comfort- the verb form. We are called to open our eyes, ears, minds, and hearts to God's work that is beyond definition and comprehension. We are led to "paths as yet untrodden and through perils unknown". Along the way, we are to comfort. Comforting others does not mean offering platitudes or promises that are hollow at best and lies at worst.

I was not defined by my uterus and now I am not defined by not having one. On the day of the trumpet sound, I will not have to account for the parts I had or have. Instead, my words will be shut up as I account for my time. Will it turn out that I sought to be comforted or to comfort?

Will it turn out that I shut up long enough, loudly enough to hear where I was called to be and to offer the comfort that can only come from God?
Posted by Pastor Julia at 8:34 PM