Beginning in mid-May, I will be going on sabbatical for 11 weeks. Entering my eighth year of service to the same congregation permits me 12 weeks of sabbatical leave that can be used for a variety of purposes. Sabbatical is not vacation, but does use one's yearly allotment for continuing education. (I already went on one week of Con. Ed. this year, so that's why 11 this summer.)

During my sabbatical, I will be going to Poland (by myself), going to the East Coast (with my kids), celebrating my tenth wedding anniversary (with my husband), and thinking about some future writing projects and possible additional education. Thinking about not being at the church I serve for 11 weeks is strange. It also causes me to realize how much of my self identity is attached to what I do, not my title necessarily, but literally what I do and the people for whom I do. That's probably material for another post. 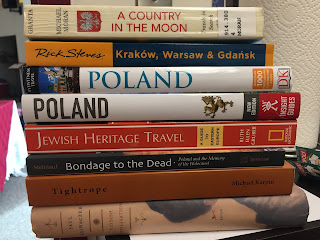 The question I get most frequently about sabbatical is: Why Poland?

I'm going on a Jewish heritage trip. My maternal great-grandmother was from Warsaw (other
maternal great grandparents came from elsewhere in Eastern Europe and Russia, also Jewish). Throughout my life, I have read about the Holocaust, those who died therein, those who died trying to save neighbors, and those who saved their lives by refusing to help their neighbors.

I have never been anywhere in Eastern Europe. I have never seen a tattooed arm, digitized- to further reduce the humanity of the Jew in question to a number and no more. I wrestle daily, truly daily, with the fact that I am not a religious Jew. I have deep seeded grief about feeling as though I have abandoned the extended relatives who died in any capacity or who risked everything to leave. They did not do it for me, per se, or for my children or cousins or even for my mother. Well, not for us personally, but they did what they did to save their own lives- escaping pogroms, oppression, and hardship- and to have better chances for those who would come after them.

While it is certainly true that living well is honoring them, still I wrestle. And I haven't yet wrung out a blessing. The psychic limping comes from dragging the weight with me and not knowing how to carry it, wear it, embody it with honesty, faithfulness, and integrity.

I am going to Poland to see the remains of the Warsaw Ghetto, to say the mourner's Kaddish at the cemetery, walk along streets and listen to my guide (hired!) tell me about the history of Jews in that place. I am going to Krakow to walk the streets of Kazimierz, to pay my respects to the synagogues and shrines, and to visit Auschwitz and Birkenau. I am walking the parks, rafting a river, sitting in milk bars, and thinking... thinking... thinking.

My mother reflected on not going on this trip with me because of the current anti-Semitic (anti-Jewish!) climate in Poland. An acquaintance as recently as two days ago mentioned the same to me, noting that while it is safe to travel, the political climate is very charged against Jews, which has happened again and again and again in Polish history. Poland, even with its map littered with the remains of concentration camps, has yet to acknowledge the historic reality of the Holocaust (the Shoah) and Polish complicity therein.

Why aren't you going to Israel, my mother asked and she was not alone. 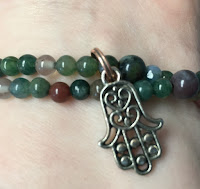 Here's the really hard thing to admit: I do not feel like I deserve a birthright trip (a visit to Israel that is part of acknowledging and discovering one's Jewish heritage in the present). Even with mixed feelings about Israel's actions and the United States relationship thereunto, I do support the Israel's right to exist and the Jewish need for her.

But, since I am not even sure where my menorah is since I moved from Nome (in 2005), I do not feel a Jew in good standing in my mind and heart to go to Israel during this sabbatical.

I do, however, in my mind and heart, need to go to Poland. I need to see, feel, taste, and weep over what is some of the soil of my heart. I need to see the pain and mourn all that was lost, including that which I will never know, perceive, or comprehend. And I need to go to bear witness to Polish history toward Jews. I need to go- not primarily in my Lutheran pastor identity, but as a Jew looking for part of her story, part of the story of death, rejection, exclusion, and pervasive hope in G-d.

I need to go to whisper at some point, or several, that I have a good life and that I will not forget and that I will teach my children what it means to listen to the strike of a match to light a candle, to pray in a certain way at certain times, to look for mezuzahs, the words of the mourner's Kaddish, how to make a matzo ball, and how not to take safety or protection for granted, even in America.

Even in typing this, I have come to a realization. The Passover meal closes with the prayer and the cheer, "Next year in Jerusalem." I do not know that 2017 holds that for me, but I understand one thing. For this Jew, the road to Jerusalem goes through Poland.
Posted by Pastor Julia at 2:21 PM

Wonderfully reflective. My husband has a Polish mother, born in the US of emigres from Poland. DNA tests showed 2% Ashkenazian Jewish bloodline. He’s proud of it, and calls me a “shiksa” :) I went to Ireland (my great-great grandmother was a “famine” emigre. Returning to the lands where our ancestors walked provokes deep reflection, healing, and peace. I hope you find all those.