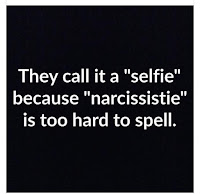 The other day I saw this meme on Facebook and it was liked by several people I respect. The poster (who I doubt was the original poster) was not someone I knew, but a pseudonym (I assume and hope) that asserted that this person enjoys being the grouch in a congregation. That's too bad. Something about this particular picture/meme set my teeth on edge. It's not because I love selfies or even that I take very many. This has the tinge of annoyance that implies that people who do something differently than you are wrong, even if what they are doing is not inherently wrong.
For much of human history, the people who were preserved in art had money. You had to have plenty of money to have your image carved in stone. You had to have the connections to commission a likeness and the implied power to keep the artist working. Even if a particular artist was creating an image that involved, say, a biblical persona, he (or she) might model the scene with a likeness of a local leader or wealthy person.

Eventually art became even more of a sponsored medium and artists used less wealthy people for models. Nevertheless, people in lower classes or possessing less wealth might be posed in painting or reliefs, but certainly never expected to own one. Self portraits were still for the upper-classes.

When photography came into vogue, it was partially disdained because of its equalizing effect. Capturing slave and empress alike, it meant that people for whom a family portrait had previously been out of reach could now have one- a prized possession. As the technology marched on, more and more of the "mundane" side of life became captured. If one can sit through family film strips or videos, one would see birthday parties and dinners being served. I remember my dad borrowing a video camera to make a movie for my grandparents and in the video we showed the areas in which
we liked to play. I sat on a rock and recited the books of the Hebrew Bible. This is not the stuff of museums, but it is the stuff of life.

So back to selfies, it's not necessarily narcissism. Unless one believes that is the natural state of art de-evolution from only the upper crust having access. The selfie is a way that people show where they were present, whose company they were enjoying, and what they saw. Not every selfie is a work of art and some may inherently be in poor taste (which is just a risk one runs with art, in general).

Regardless, we must be aware of how we talk about selfies and those who take them. In disdaining the self-portraiture of the masses, as it were, one may sound less like a grouch and more like a snob. Sneering and contempt have no place in a congregation, whether one is a grouch or not.

Love this. Thank you.