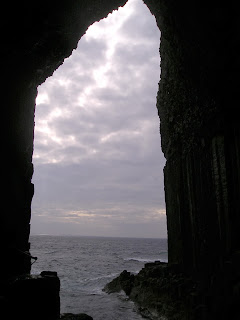 The written word of God, what we call the Bible, is a gift of the Holy Spirit to the faithful in the ages of scrolls, of parchment, of the printing press, and of digital technology. The Bible is not our God, but it is a manger in which Christ is laid. When we come to this manger like a shepherd, with humble hearts, and at heavenly urging, we will find our hope and our salvation.

Why Revelation during Advent (or ever)? Advent is an in-between season that often gets overlooked in both church and secular society. The themes of anticipation, hope, peace, restoration, letting go, quietude, and discipleship can easily get lost in either frenetic Christmas preparation or in fear of the more dystopian themes of our news cycle and the biblical readings assigned for this time of year.

When Revelation was written, either very late in the first-century A.D./C.E. or early in the second, the people who followed the Way of Jesus find themselves outside of their society. If they lived in Roman-occupied areas, as did most of the people who received this letter, they were confronted with an emperor who had declared himself the son of the gods. Furthermore, both Jews (Christian or religiously Jewish) and Gentiles (Christians who were not ethnically Jewish or Judean) were being persecuted for their faith practices that put them at odds with the Roman culture.

Those who chose to live in imitation of Christ disregarded some of the social “norms” of their time. They shared what they had with one another and with those who struggled. They understood equality among men and women, slave and free, young and old to be a hallmark of their community. They did not give worship or undue honor to the emperor, especially not as a god. Their refusal to participate in the guilds that honored Roman gods and goddesses interfered with the Roman marketplace and finances.

Apocalypse means “unveiling”. So this unveiling or revelation to John is a Spirit-led interpretation of what it means to follow Jesus under the oppression of Rome and Rome’s leaders. The back and forth between Roman power and heavenly power described in the book was meant to give encouragement to Christians to continue in worship, discipleship, and trust in God. John’s writing involves a lot of Roman imagery, especially the symbols of the emperor and Roman power.

When we read Revelation, it is important to understand what metaphor and symbolism mean in the book and then how the Spirit may lead us to understand these things in our own time. There is not always a direct correlation between a metaphor of Roman power and a way that power may be used well or abused in our own time.

The overarching theme of the book is to remember that God is the beginning and end of all things. When we are afraid, rather than seeking to clarify the signs around us, we are compelled by Christ to our knees and to our community in worship of the one true God and then driven back out, by the Spirit, to serve our neighbor-  be they Roman, Lutheran, Montanan, or other.

I encourage you to take (at least) 10 minutes a day for this study. Give yourself time to read the Bible passage in your preferred translation. If you can read it out loud, do it. I often find that it is easier for me to understand difficult passages if I read them out loud to myself. Then read the devotional and the prayer. Let the words of the scripture and the meditation roll through your mind like water in a river over rocks. Allow the power of the Spirit in that rolling to smooth out the jagged edges of fear and to bring to you the consolation of God’s power and majesty.