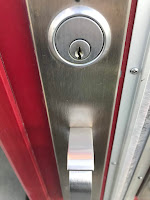 I accepted a call to serve a new congregation, which meant leaving my keys for the maroon and glass door behind. From what I learned on both sides of that door, I have come to a new place to serve new people, but the same God. For the first time the other day, I unlocked a new door. Eventually, I will unlock it for all the same reasons and then some new ones. 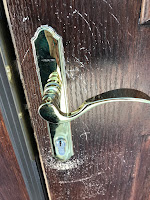 Mostly, I think about how God remains the same. I do believe that God's character is immutable, but I also believe that God's actions, throughout history, happen in spite of and despite the actions of people. I think that the Divine Three in One has, on occasion, had to change course due to the reality of human self-centeredness, stubbornness, and desire for control. Even in the course change, God's own heart remains merciful, loving, and compassionate- even in correction.

So, there are new doors, new faces, and new lessons. And I still love what we've left behind.

But life is made in the little motions of daily living. The habits. The paths. The words. The keys, the doors, what we unlocked and hold open. What we lock and hold closed.

And, in all of this, God remains on both sides of all doors.

What a great reflection on ministry and the character of God.