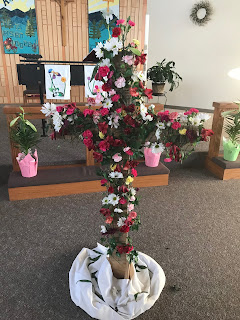 We don’t often talk about the order of the books of the Bible. You and I both know that it didn’t fall from the sky, bound in leather, and written in King James English, with the words of Jesus in red. While I love to talk about the whole story of the compilation of the written word, today I’d like to zero in on the two accounts of the resurrection that we heard.

As they say, timing is everything. 1 Corinthians, a letter from Paul to the followers of Jesus in Corinth, is older than the written gospel account according to Mark. Almost all, if not all, of Paul’s remaining seven letters were written before the written gospel accounts were widely circulated. Mark is the oldest of the four gospels that were retained in the written canon or generally accepted books of the written scripture. All that is to say that when we look at today’s readings, what Paul has to say was the generally accepted story about the resurrection in his neck of the woods, ten to fifteen years before Mark’s account was written and moving around in the countryside.*

Why does that matter? If we consider that Paul’s account was the dominant narrative around 45-55 c.e./a.d. , then we see a story that was spread with some confidence. People with reputations to lose were willing to risk them on spreading the good news of Jesus Christ as they had received it from credible eyewitnesses and community elders. That message, that Jesus had been killed, but that God had raised him from the dead, was shared and the hope of that message created a new kind of community.

This community, along with the risen Christ, was the kind of welcome and drawing in that even gave hope and awareness of redemption to Paul, who had been a persecutor of that self-same group of believers. Paul speaks with fervor to the Corinthians about the faith they have come to trust, especially because it put the story of Jesus- his life, death, and resurrection- in accordance with the scriptures.

Thus, those who follow the Way of Christ have not only learned about faithful living in imitating Jesus, but also about the true, abiding, and grace-filled nature of God. Since the Divine nature is eternally present and magnetic, the reality of Jesus reveals forever truths about the mystery and fullness of who God is and what God is about.

Now let’s say that there are fifteen years between when Paul writes to the Corinthians and when Mark, along with others, writes down a gospel account. Fifteen years. If we pick the earliest possible date for Paul’s letter, 50 c.e., that puts Mark’s writing at year 65.

What’s happening in the Palestinian countryside in 65 c.e.? Nero is the emperor of Rome until the year 68. Nero’s reign is generally associated with tyranny and extravagance. He liked what he liked and he liked people who made the things he wanted to happen. Even though his reign is still in the larger period called the Pax Romana or the Roman peace, it is only because Rome was not expanding and was generally not at war with larger enemies, though the emperors during this period did squash small-scale rebellions.

During Nero’s reign, Judeans revolted against Roman rule and oppression. Some Judean Christians were still meeting in synagogues and had ties to the Jewish community. When the whole area rebelled against Rome, it affected everyone. And Rome slapped back.

So Mark is writing the narrative of Jesus, the Son of God. In Mark’s narrative, some unexpected people- Gentiles, women, demons, children- recognize Jesus as the Messiah. Others- the disciples, religious leaders, faithful Jews- struggle to understand Jesus’ message, deeds, and death. Imagine, if you will, that you are in a time of political unrest, a time of extreme disagreement between citizens, a time of force and violence from the state and actors for the government, and, within religious communities, a struggle between which people are the “most” faithful. Are you able to imagine that?
Thus, we find the collapse between Paul’s confident account of the resurrection and its credible witnesses and Mark’s women fearfully approaching the empty tomb. Writers shape stories for their community. They write the truth in shape and size that their people- readers and hearers- can handle and not be driven away.  Mark’s hearers will be scorched by Paul’s confident narrative.

In their experience of community destruction, fights about inclusion, and wondering what will remain, the Markan community feels betrayed. As I read through the end of Mark this week, I was intrigued by how often the word “betrayed” showed up, how frequently Jesus was betrayed- by people pleading ignorance, people denying, people abandoning, people watching from afar, people actually betraying- even with a kiss.

Why does Mark find betrayal of Jesus so significant? It may well be because, unlike Paul’s audience, Mark’s hearers feel betrayed themselves. In fact, they feel betrayed by God. They had believed the story of the resurrection. They had trusted the accounts of the witnesses. They had risked their community and family life to imitate Jesus by healing, serving, and sharing his story. Did they get safety? Were they relieved of Roman oppression? Were their holdings multiplied? Did they find all their needs met?

Thus, Mark finds himself within a community that is asking the ultimate question, “Was it worth it?” Was the cost of their discipleship worth it? You can’t eat eternal life. It doesn’t clothe anyone. It builds no houses to keep out rain and snow. As real a promise as it is, eternal life does not end wars, plant seeds, or create justice and reconciliation.

So what was resurrection for, asks Mark’s people, if we are continuing to suffer? Does resurrection mean anything if it doesn’t change our day to day lives?

Stay with me, now, because I’m going to make a leap. I was recently listening to a fictional story with my son. In the story, a boy made a phone that talked to ghosts. On the ghost phone, the boy called Abraham Lincoln and the boy’s mom called Amelia Earhart. Daniel, my son, told me he would call Neil Armstrong and ask him about walking on the moon.

He then asked whom I would call. I thought for a minute and then I told him that I would call Sophie Scholl and I would ask her if she thought it was worth it. 1942, Sophie Scholl and her brother Hans were beheaded for spearheading the White Rose campaign in Germany. The White Rose campaign spread leaflets, primarily on university campuses in Germany, about concentration camps, the misinformation of the Third Reich, and the violence of the Nazi regime.

I want to tell Sophie that the war went on for three more years, that genocide continues to be a reality in the world, and that there are still people who believe in the supremacy of whiteness over other races and ethnicities. I want to ask her if, knowing all that, she would still do it again. Would she still, knowing that she would die and not necessarily cause the uprising she hoped for, would she still spread those leaflets, speak up for justice, and die for what she believed was right? And, frankly, I don’t know if I want her to say yes or no.

I wonder the same thing about Peter and Paul, Martin Luther King, Jr., Harvey Milk, Mary- the mother of our Lord, and anyone who has struggled, suffered, and/or been killed for their work. Atonement literally means at-one-ment. All of these people are trying to create an atonement- a reconciliation and repair- of serious wrongs that have been done. Is discipleship atonement worth the cost, if it’s your life?

Going back to Mark, then, it strikes me that the gospel writer is attempting to answer this question for the followers of Jesus who feel betrayed by God. It turns out that God will always say, “Yes, I would do it again.” Poured out into flesh, experiencing the joys and griefs of being human, healing, teaching, and forgiving for the sake of community and hope, reversing human attempts at final rejection in death through the power of resurrection… Mark sees God’s word as “Yes. Yes, I would do it again.”

It is in God’s own completion of the work of atonement that we come to understand the true power of resurrection in a world that aches with racism, poverty, LGBTQ-exclusion, class divisions, anti-Semitism, white supremacy, and general bitterness and division. Resurrection doesn’t mean anything for our day-to-day lives unless we accept the work of atonement. Not only God’s atoning work, but the discipleship at-one-ment we are called to in all our vocations- work, family roles, friendships, citizenship, consumer, and follower of Jesus. If we are hesitant to take up the work of discipleship atonement, we struggle to see the Easter message in our everyday experience. Conversely, commitment to atonement work at home, at church, and in the world brings a deep awareness of the risen Jesus meeting us in all places, in all people, at all times.

For those of you have received the gift of faith easily, this concept may seem self-evident- of course, God would do it again. God planned it the first time. You are right. You are 1 Corinthians people. Paul’s confidence and credible witness is your shared experience.

For those of you who wrestle with the gift of faith, who feel that God has presented you with a Rubik’s cube of information that you are trying to make into a neatly solved puzzle, you are not alone. Mark’s community wanted relief from feeling betrayed and from feeling like betrayers because they were not like Paul. They needed to know that their fear, their uncertainty, and their silence was possible in conjunction with their faith. To you, to you, I say, God would do it again. Mark’s short, fast-paced gospel features story after story after story that point to God’s “yes” in Jesus as a revelation of the Divine “yes” of eternity.

In God’s holy, mysterious reality, atonement and discipleship are always worth the cost. And it would be worth it to save just one. Because that one is beloved, beloved by God. And that one is us. That one is you.

For the sake of the world. For you. Christ is risen.


* Oral accounts that dovetail with Mark’s account were likely in circulation prior to the writing of the gospel narrative.
Posted by Pastor Julia at 5:55 PM