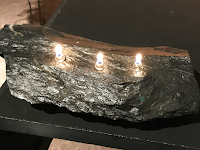 I am a pastor of a small church- a church full of people whom I love and whom I greatly trust that God loves. On Sunday mornings, there may be any number of children and older people, this includes my own children and some of their best friends.

I have spent a lot of time thinking about what I would do if someone came in and began shooting.
I've analyzed what I could throw, how quickly I could get to any part of the sanctuary, and how much time I could buy for others by engaging with a shooter- hoping that my death through that engagement would buy others time to attack unseen, hide children, or escape.
I move my cell phone around in the sanctuary- to be within my arm's reach- so that my last act prior to engagement would be to call 911. I worry about if I don't have time to do this and I may not, but it's part of my mental plan.
I am a gun owner. I'm an okay shot, better than okay at close range. My husband has asked me, on more than one occasion, to keep a gun with me at church.
Where?
In the pulpit next to the Bible?
In my pocket?
In a shoulder holster, under my diaphanous robe?
In my purse, carrying said purse with me everywhere like Queen Elizabeth?
I can't bear this. I cannot bear the thought yielding to my fears. There is making a plan and then there is introducing another problem into the situation.
My need to have this plan and think these thoughts is not because God "isn't allowed in schools" or because of the use of psychological drugs or even because we have culturally determined that child sacrifice is preferable to some restrictions on gun ownership.
The need to have this plan is because we have chosen as a culture to make guns our idol of choice. Believing their false promises of safety and self-determination, we have put them on a pedestal and worship them at the altar of unrestricted access and personal freedom. Our call to community living as a nation, cities, and smaller groups has been sublimated to believing that we are entitled to having what we want, when we want it and to extracting revenge and never dwelling for long in feelings of discomfort or pain.
This is the direct result of patriarchy, white supremacy, and rape culture.
Let me be VERY CLEAR that I am not saying that everyone who owns guns rapes or is a white supremacist.
I am, however, saying that we (almost all of us) have contributed to a culture where many people, especially white, cis-gendered, heterosexual men, have been socialized to an unhealthy level of entitlement regarding other people's bodies, property, and opportunities. And, through our gun idolatry, they see a cultural worship of tools that allow them to respond with deadly force when they do not get what they have been taught and believe they "deserve".
This is a complex issue, but it isn't actually that complicated and it's not impossible to improve.
But we have to want to. All of us have to want to.
And until that happens, I will be preaching with a phone nearby, thinking about how far I can throw the large rock that sits on the altar, and praying that most of the congregation will be saved, even if I am not.
How's that for your thoughts and prayers?

A Litany for Mother's Day

May 07, 2011
A: Loving God, You are everywhere the Lord and Giver of life. We praise You for the gift of mothers through whom You give us life. C: We thank You for their willingness to nurture life, for their trust in You to guide them through the labor of childbirth, the uncertainties of youth, the letting go of young adulthood. A: We thank You for all those women, who did not give us birth, but through whom You give us abundant life: C: We thank You for school teachers, aunts, grandmothers, sisters, pastors, elders, Sunday School teachers, supervisors, co-workers, neighbors and friends who share wisdom. A: We ask Your tender mercies on all those whose mothers now sing with the heavenly chorus, especially for those whose tears are not yet dry. C: Grant them Your peace, which passes all our understanding. A: We ask Your comforting presence on those mothers who have buried sons and daughters. C: Comfort them with the knowledge of their children in Your eternal care. A: We pray for those w
1 comment
Read more

January 16, 2022
Scripture: John 2:1-12 A sermon is best presented as a smooth stone, something the Holy Spirit has worked on in me and then I present to you, with the Spirit’s help. You can then turn that stone over and over, seeing how it reflects brightness and absorbs shadows.     A good sermon has heft, as well as tiny flaws- keeping you focused on the perfect God and not the imperfect preacher. If the standard for a good sermon is a smooth stone, as I just said, then today- I do not have a good sermon. Today’s words, with no less help from the Holy Spirit, have a ragged edge. This sharpness has snagged at me this week and resists polishing.    It is not lack of preparation that has retained this unpolished roughness; it is the difficulty of the question at hand. The texts of the day bring us to a question that cannot be answered in this life, not without great risk to integrity and faithfulness. This is my content warning. While there are some smooth edges ahead, this sermon is more of a cutting
4 comments
Read more