It's late, which means writing a post is probably a bad idea since this is neither a confessional nor a diary. Nevertheless, I'm typing away. On Sunday, we (the congregation I serve and me) drew our star words- adjectives and adverbs that might give shape to our year in one way or another. 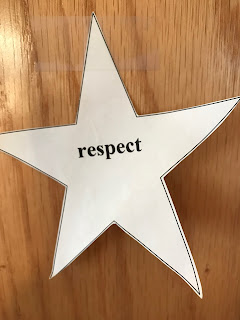 Since drawing my word, I've wrestled win it. I will unspool some of that wresting here and some will be between me and the Holy Spirit.

My word is "respect".

Of all the things I might struggle to respect- close to the top of the list is the President- Elect. However, I have always been respectful of the office of the President. It makes me sad and frustrated when people refuse to call a president by name, using epithets or euphemisms. I have been driven to deep grief by how people have treated and spoken about President Obama.

I said many things about Mr. Trump when he was a candidate. Most weren't kind and I did mean them. However, I have skin in the game of the American Experiment and I respect certain offices, though I disdain racism, sexism, anti- LGBTQ actions, idolatry of the free market, and abuses of power. In a little over a week, the prayers of the people will change to be "We pray for our president, Donald, our governor Bill, our Senators Dan and Lisa... "

I have been praying for how I can pray with deep intention and respect for the President-Elect and how I can respond with courage and power to the real concerns and fears of many people, including myself.

However, I will not ask for Divine Help to respect taunting, intentional disruption livelihoods, petty behavior, jealousy, treason, deliberate ignorance, pandering, or pouting. Someone once told me that I preached tolerance, which told me that they don't listen to me. I never use that word. I might accept certain things that the next person doesn't accept, but if I don't think it's okay- I don't tolerate it.

I will continue to respect the office of the president. I will pray for President-Elect Trump in his transition and in office. However, I am still the very very very politically minded girl I've been all my life and, as I always have had with every president, there are a few things that I will not tolerate.
Posted by Pastor Julia at 2:00 AM