I’m going to Washington, DC at the end of March for a church conference. What should I see while I’m there? (Vietnam Memorial, Washington Monument, etc) What are those things for? They serve as markers and reminders (monuments) to events and people of the past. They help us remember things we have promised not to forget and things we might try to forget and things we truly want to remember. Monuments serve as markers for the best and worst parts of our human nature, which is part of why we build them. Other people in other countries make the same effort, showing birthplaces and homes of famous leaders, historic places of worship, sites of battles and deaths.

Knowing how likely we are as people to erect monuments and (now) to make attempts to preserve historic locations, can we really blame Peter for his desire to build a tent on top of that mountain? After all, throughout the Hebrew Scriptures, there were many locations where people put up cairns or rock altars to commemorate God’s help or blessing. Here, on this mountaintop, Peter, James, and John have seen Moses and Elijah. (How they knew it was Moses and Elijah I have NO idea.) Literally in front of their eyes, they see the person through whom God gave the law and the foremost among the prophets.

Not only is Peter seeing the two main heroes of Jewish faith, but he’s also seeing two people who have no monument other than their deeds. When Moses is not able to enter the Promised Land with the Israelites, he dies and is buried. They don’t carry his body with them and their motion is forward. No one knows where he is buried by the time anyone could go back to mourn him in location.

Elijah is taken up into heaven in a whirlwind- a crash of thunder and winds that terrifies everyone who sees it. There’s no monument to Elijah. No specific place to go and contemplate his deeds. Again, the two main heroes of the Jewish faith have no monument other than their deeds.

Peter may be uncertain about what it means to believe Jesus is the Messiah, but he knows what to do if he’s seeing Moses and Elijah. Not only is this location obviously holy, but also a monument here would be helpful to so many people. What a good idea! And if they’re sticking around to build a monument, you know what they don’t have to do… head into Jerusalem. If what Jesus says about betrayal and death is true, maybe they can forestall it by working here on a monument, on booths that celebrate the revelation of Moses and Elijah.

Then the voice comes from heaven, saying, “This is my beloved Son, listen to him!” And with that the idea of a monument, as well as Moses and Elijah are gone, and they are there with Jesus and no one else. The disciples are still struggling, not just Peter, with what they are seeing as they travel with Jesus. They are trying to reconcile what they’ve heard their whole life with regard to the Messiah and the fact they believe… they want to believe… they’re trying to believe that God’s Anointed (Messiah) is right there with them.

Not only is Jesus not acting in the swift justice, furious vengeance, David/Moses/Elijah hybrid that was dreamed (and maybe promised), but he’s also telling his disciples that they can’t follow him and act in that manner. In other words, they have to tear down the monuments of their expectations- the Messiah monuments in their hearts and minds- so that they can actually experience the Jesus who is right there with them. The Rock of their own imagination is stopping them from hearing the living Word, the Rock of Ages,  right there with them.

The same thing happens to us. We have monuments… Bible translations, liturgies, denominational polity,… that we have built based on who we think Jesus is. We then get caught up in maintaining those monuments, which we interpret as right religious behavior, and forget to listen to the Living Word, to Jesus. Part of how we are to interpret Scripture, our own actions, our decision making is through the lens of Jesus- what Jesus would do and what Jesus would have you do… have us do. The monument, the marker, we build for Jesus is how we live our lives.

The mountain of the Transfiguration gives us a glimpse of Easter- just before we go back down the valley into the season of Lent… for the walk to Jerusalem. It may sound strange to say, but Easter becomes another monument that gets in our way… in the way of hearing the voice of Jesus. When we become intensely focused on the death and resurrection, we make just another monument of the cross and empty tomb. Another place to visit, to be moved by, and to leave. 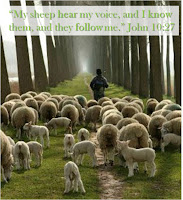 But listen to the voice of Jesus… we can be… we are transfigured as disciples for this life. We aren’t simply waiting for heaven, but we have the Messiah in our midst for living right now. This is a monumental advantage to a living God, to a God-with-us. We have received the Spirit so that we may be transformed and be transforming in our every day lives right now.

Was Jesus the Son of God? Was he the Messiah? Did he walk on the earth? Does he meet us today? In essence, are God’s promises true? (Can I get an amen?)

As part of the on-going transfiguration of our faith, we (like Peter, James, and John) have to tear down the monuments we have built to what we want Jesus to be, what we have made Jesus out to be… and allow Jesus’ voice to show us who He (and through Him, God) really is. This is part of the work of Lent- to hear and be changed by the radical power of who Jesus is… in his whole ministry. We, too, are being told to listen to the Beloved Son.

What does Jesus say to his disciples, some of those hard words: "If any want to become my followers, let them deny themselves and take up their cross and follow me. For those who want to save their life will lose it, and those who lose their life for my sake, and for the sake of the gospel, will save it.” That’s not a call to monument building- to lovely memorials of stone or gardens or well-preserved houses. It’s a call to a full life, lived in the Spirit… a transfiguring life that does not leave the world the same… a life that begins the minute you and Jesus go down the mountain.