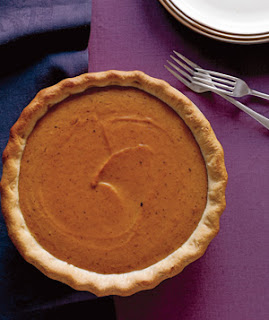 Please answer these five questions about pie:
1) Are pies an important part of a holiday meal?
Well, I love pie, but I don't make them. Thus, pie is not a crucial feature of a holiday meal at my house. Again, though, I love pie. So, if you're coming over, I'll probably ask you to bring dessert. Bring pie.
2) Men prefer pie; women prefer cake. Discuss.
I feel like this is a mood thing for me. Sometimes I want pie. Sometimes I want cake. Since I don't make pies, that craving may typically go unfulfilled. I do like cake, though. Creamy chocolate frosting, dense poundcake, squishy angel food. Mmm, cake.
3) Cherries--do they belong in a pie?
No, they belong in a cobbler. Except apple, I prefer all fruit in cobblers (no bottom crust, thicker top crust) to pie. And I like Apple Brown Betty better than apple pie.
4) Meringue--if you have to choose, is it best on lemon or chocolate?
What is this "better"? It's dessert. There might be preferences, but there is no "better". Chocolate.
5) In a chicken pie, what are the most compatible vegetables? Anything you don't like to find in a chicken pie?
Peas, carrots, pearl onions. Yum. No potatoes in chicken pie and no tomatoes.
Bonus "chicken pie" story: When I am in love with a food, I will eat it until I'm sick of it. At my college formal, I went with the roommate of a friend of mine and said friend went with my roommate. (Clear enough for you?) We went with a few other couples to dinner before the formal at a fairly nice restaurant in Raleigh, NC. The restaurant was famous for its wood-fired grill and everyone ordered fish or steak. However, I spotted artichoke hearts on something called "Fabulous Chicken Pie". Artichoke hearts were my new food loooooove and I was thrilled to see them. The chicken pie in question, however, was about 1/3 of the cost of everyone else's dinner. I asked if it was only for lunch and the waitress said that it was available for dinner. So I ordered Fabulous Chicken Pie, imagining a lovely chicken pot pie with my delicious artichoke hearts. As the other entrees arrived, plated and garnished within an inch of their life, the spot in front of me remained empty. Until, lastly, out came the Fabulous Chicken Pie, which turned out to be a pizza. A big pizza. With artichoke hearts, chicken and sun-dried tomatoes. Whoops. So I sat in my fancy hair-do and slinky dress and ate a pizza (or most of it) by myself while everyone else at the table at some very high-brow food. I suppose I could have been embarrassed, but those artichoke hearts were good. :) To this day, I've never seen artichoke hearts in an actual chicken pie, though I've eaten them on pizza many, many more times.
Posted by Pastor Julia at 2:15 PM

I like your attitude about "preferences" in pies or desserts--not many are "bad" and I just like sweets!

oh artichoke hearts on pizza are delish!! always, dressed up or dressed down...