Inspired by the Breath of God

At our next Bible study, could you say a little something about your understanding of "God-breathed" and the relationship of that phrase to scripture? 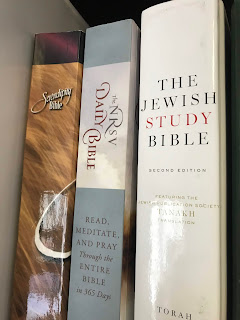 Firstly, it's unlikely that I'll ever say a "little" something regarding anything related to the Bible, but I will try to contain myself.

When I look to the word theopneustos, I find the word and the concept awe-inspiring. Theo for God and pneustos for breathed means a vision of how God moves and exists that includes bringing creation into existence. Theopneustos makes me think of the Spirit, as the Breath of God, moving over the void at the beginning of all things. Out of disorder and emptiness, creation was birthed and shaped. God's whole self poured out in breath (Spirit) and then in Word ("Let there be..."). Thus, the reality of theopneustos has existed since before any human was present to interpret it.

That being said, what does it mean for Breath and Word to come to a prophet (or an apostle)? In Geraldine Brooks's The Secret Chord, the prophet Nathan experiences near blackout states when he is called upon to speak to David. His body and his speech are overtaken and his voice becomes not his own. In this depiction, his prophecies are clearly God-breathed. Given some of the things that Nathan is called upon to address with David, surely the strength and the words needed to come from outside himself. Did they always? I don't know.

In writing for preaching, I sometimes have a strong bodily awareness of what I meant to say. I describe it as a piercing of my heart. I have a sense of what is meant to be said and, in the best times, the words come in close connection to the piercing. Sometimes the idea comes, but I have to wait for the words. When I have to deliver a sermon that has come in this way, I tremble before delivery because I know the concept is not mine. I don't want to mess up or try to take credit for what God is trying to do or what I have perceived that God is trying to do.

In these two examples, Nathan and me (never heretofore mentioned in the same sentence), God is delivering a word. There is a revelation of what the Spirit wants to be communicated and it is in keeping with who Jesus is and God's on-going self-revelation. Nothing a prophet or preacher is called to say, if it is truly of God, will contradict the nature of God- even the most intense and life-changing revelation.

That being said, neither Nathan nor I can testify to something we are unable to perceive. So, it is true that God inspires and gives revelation, but said revelation and inspiration, in my opinion, is likely only half-steps ahead of where we are as people. Thus, it seems unlikely that Nathan would have received inspiration for where the capital of England should be or that I will receive inspiration for how to terraform Saturn. Those are not revelations that are meaningful or relevant to the situations to which we have been called.

When scribes were writing Judges or Paul was writing to the Philippians or Revelation was being written for the encouragement of the early church, it does seem likely that theopneustos was at work. God breathed words and guidance for the authors to offer to their audiences. While it is with God's nature to know how long Paul's letters would last, it was not within Paul's capabilities to write for the ages. So God gave him words that were true for the time being and would be useful, alongside the Holy Spirit, for generations to come.

Of course, when we think of scripture, we think of the editors, the redactors, the translators, the scribes, and the church fathers and mothers who prayed about what to keep in the canon and what to reject. While the Spirit certainly guided all this work, human fallibility is unavoidable. In the best of circumstances, small unintended mistakes were made. In the worst of circumstances, intentional errors were made or kept for the purposes of preserving this or that human understanding or institution.

Therefore, in its initial imprint, the scripture was breathed by God for teaching, admonition, correction, and training in righteousness all toward the end of instructing us toward understanding salvation and living lives which demonstrate that we belong to God (2 Timothy 3:16).

Since that initial writing or prophesying, however, many people have entered the process. Most people have had good intentions toward sharing the word of God, but others have been less pure in heart. It is true that God is still speaking. The Word has not retired nor has the Spirit stopped moving. We are led constantly into relationship with the written word for the purposes of teaching, admonition, etc. to the same ends as those who receive guidance from the author of 2 Timothy. We use the Bible as a tool to understand God, to know God's history, and to be pointed to where and how God is still at work in the world and leading the faithful to participation in that work.

In my opinion, when and where it is argued that the written word is infallible, such arguments attempt to steal the air out of theopneustos. The written word can be inspired, useful, important, and necessary, but it is not and never will be God. Furthermore, God is bigger than our translation mistakes, printing errors, and personal whims tied to time and place. God's desires for creation are truth and the truth will out. And it will set us free. Theopneustos cannot be contained.
Posted by Pastor Julia at 2:14 PM