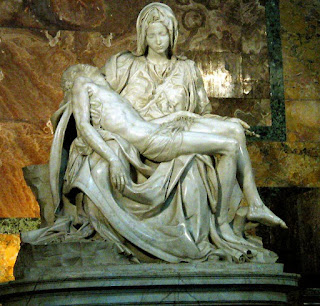 The series took a hiatus while I gave time and energy to be with a grieving family and a dying saint. I appreciate your patience.

Jesus said, “Let the little children come to me, and do not hinder them. For the kingdom of heaven belongs to such as these.” (Matthew 19:14) I think about that verse when I read Revelation 13. So much has been made about this chapter, gallons of ink spilled on it alone, that it can be hard to read it with new eyes. Thus, think about how you might explain this to a child. If we cannot explain the scripture to a child, then either our interpretation is off-base or Jesus was wrong. Which one of those two would you like to pick? (I do realize that creating a binary there isn’t necessarily helpful, but please let it stand for this post.)

Let’s approach chapter 13 as though we were going to explain it to a 9-year-old. We have a different relationship with dragons now, but imagine if you didn’t have books and movies about dragons. Imagine the rulers of the world used the images of power and fire, like a dragon, to make people scared. How would you feel if you saw shields with dragons or red flags, like dragon fire, carried on long poles as an army rode by?

Then what would it be like if your friends and their families all said, “We have to follow the emperor. He is looking for all the people who don’t decorate their house with dragons. If you don’t sing the dragon song, he will send the army to kill you.”

Your family and you believe that a house should only have words from God in it and no pictures. Your family will not get on their knees when the emperor’s dragon flag goes by. Your parents say that you are not allowed to sing the dragon song- not at home, not on the playground, not if you’re by yourself. They say that the emperor says he is God, but you know that he is not. Your friends aren’t allowed to play with you anymore because their families are scared and they believe in the emperor, or at least in the emperor’s power.

Sometimes the emperor makes things that seem good happen. His army triumphs over invaders. He allows extra grain to come into the market. He slows down the sacrificing of people in the Coliseum since it is for his entertainment that this happens.

When your parents talk about the emperor with their friend, the ones they know from house church, they use a code. In this code, a different number represents each letter of the alphabet. They use the numbers in conversation so that no one will overhear them speaking ill of the emperor.

What do you do, oh, proverbial 9-year-old?

This is the essence of chapter 13. It is revealing the symbolism of Rome and the emperor as a cult. Like most cults, this one demands the worship and devotion of those who wish to benefit from the cult’s power and resources. As the cult grows in power, those who are uncomfortable or even fully dissenting will have to work harder and harder to resist and to survive.

Gematria is the system of determining the numerical value of letters. Jewish people at the time of John’s writing would have been familiar with this system and it has counterparts in Greek, as well as in other languages around the world. The name “Nero Caesar” has a numerical value of 666 in Hebrew. In textual variants, the number is sometimes 616, but that also becomes “Nero Caesar” in Greek or Latin. The famous number is just a coded way of talking about the emperor. “I’m thinking of a number. It’s for someone’s name. Can you guess who?”

The other significance of 666 is in relationship to the use of the number seven (7) throughout Revelation. John uses 7 as a number of completion and perfection. Six falls short of seven. It can never be the perfect number. The use of 6 in relation to the beast and the dragon is to remind the readers, once again, that the empire is NOT the same as God’s kingdom.

Potential Takeaway: John’s readers are shown through more symbols (apocalyptic literature for the win!) that what the world offers cannot reach what God freely gives. We often mix up those two systems, believing that we can easily acquire worldly stature, but we will have to work hard for heavenly grace. Grace is grace. It is free and is truly appreciated when we realize what it cost God to give it (becoming human and suffering our rejection in the flesh). As we grow in appreciation of grace, we will then be led to respond to it by correct worship, caring for others, and stewarding the world that God made.

Gracious and generous God, Your power is so much greater than anything the world can show us. Yet we remain bombarded with the signs of earthly status and success. Guide me into faithful worship in thought, word, and deed- that I might resist that which fades and find strength and hope in what is eternal. Amen.