What Needs to Be Said 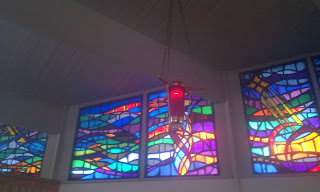 Those words have to be written out with ink and a quill. They must be scratched onto expensive paper. Then to print and distribute your work of 65,000 words, each page must be set out carefully in the moveable type of the time, inked, and printed. Then the pages must be collated and then tightly handsewn together.

If a book had an illustration, it was likely a block print- carved out of wood, pressed in ink, and the image transferred onto the paper.

All of this sounds tedious, and it was, but it was so much faster than the hand-copying of the previous centuries, prior to Gutenberg and his glorious printing press.

What was carefully written up and printed in 1543? What ideas were worth carefully laying out the moveable type, carving a block print, and distributing far and wide? What topic could inspire 65,000 words?

This is the year in which Martin Luther published "On the Jews and Their Lies". In his earlier years, Luther believed that Jews had been unable to be drawn to the truth of the gospel due to misinterpretation by the Church. Now, in the midst of reinterpretation, he has assumed that Jews and Turks (the name he called Muslims) would be drawn to Christianity. As that turned out not to be the case, and then his prince and benefactor- John Frederick, Elector of Saxony- began to persecute Jews with his (the Elector's) realm.

Slowly, as Luther aged, he became embittered against Jews and then wrote his treatise, "On the Jews and their lies". Sixty-five thousand words railing against Jewish people and calling for their schools and synagogues to be burned, their rabbis and teachers to be prevented from doing their work, for Jews to be ghettoized- unable to live among Christians, for physical protection to be withdrawn from them, and for them to be enslaved or have their property taken away until they truly converted.

Neither, in full, did the Protestant Church at the time or the Roman Catholic Church. A full rejection of anti-Jewish sentiment in the church did not happen until well into the lifetimes of some of the youngest people here.

Great effort was taken to print and disseminate this treatise around Europe, especially among those who could read German. At the same time, there was an enormous (and commendable) effort to have the scripture translated into the vernacular. Thus, people now could read the Bible in their own language, but may or may not have had the skills to reflect openly on what they read.

This means that the subject of "On the Jews and their lies" was in conversation and at the same time that people could, for the first time, read about Jesus' encounters with his own people, their conversations, and their responses to one another. If one had not been adequately taught that Jesus was Jewish, that God always keeps God's covenants, and that Christianity was grafted into Israel's tree of life, then what does do with the idea that Jews are terrible people, living in one's own cities and towns?

Like a contaminated stream flowing into a river, "On the Jews and their lies" polluted the waters of Christian consciousness. To be clear, this particular river already had anti-Jewish and anti-Semitic detritus floating in from historical persecution against Jews, which has a very long history. This poison stream, fed for thousands of years, continued to contaminate the river of Christian consciousness beyond the Reformation on through the Renaissance, the foundations of American history, in 19th century Russia, into the European and American eugenics movements, through the horrors of the Third Reich and Holocaust, continued on in various forms in the Soviet Union, was present in the KKK and neo-Nazi movements of the United States, and committed its most recent horror yesterday in Tree of Life synagogue in Pittsburgh, Pennslyvania on the sabbath day of that community.

Why on earth, on my last Sunday here [at Lutheran Church of Hope], when I have so much to tell you and so much love to share with you, would I take my last twenty minutes of sermon time to speak about the pain, the horror, and the sin of anti-Judaism? Why would I bring up this aspect of Luther's life? Is this the time? Is this the place?

Rabbi Hillel, living close in time to Jesus, said, "If not me, who? If not now, when?"

The ultimate question of life is this: Why are we here?

The religious ultimate question is not "Is there a God?" That is a philosophical question.

The ultimate religious question, which already accepts that there is a god of some kind, is: What does God want with me?

If I have accepted, on through hearing the words of faith, that there is a God and I am not that God, then my life is spent coming to understand and further accept that I am not in control of very much.
If God has done the work of:
- providing me with a pioneer and perfecter of my faith in Jesus
- giving me the gift of the Holy Spirit
- making me righteous
- ensuring my salvation
- cultivating my love [and]
- bringing me at the last to eternal life...

If I control none of those things, then what exactly is my work?

Come, see the Lord’s deeds,
what devastation he has imposed on the earth—
bringing wars to an end in every corner of the world,
breaking the bow and shattering the spear,
burning chariots with fire.

What is the devastation that the Lord causes, according to the psalmist? It is the ending of war. The bringing of peace brings devastation to the earth. The end of the weapons of war, the conclusion of the rumors of war, the elimination of the terror of violence- this is the work of the hand of God.

Why is the end of war devastating?

Because it shatters the lies about control. War is about dominance, about power, about winners and losers. War and its fellow travelers- death, chaos, pain, and uncertainty- are the tools of the forces that oppose God. They are evil. They tell lies. We forcefully reject them. They oppose God's true reformation work- revelation of love, restoration of relationship, and resurrection in the face of death.

If God's devastating work, to be brought to fruition in creation, is the end of war- in all its forms, then the people of God must be at that work. It is not work that saves us. It is the work we are about precisely because we have been saved. It is the joy of our salvation, of trusting that we have been made right with God and not by our own selves, that allows us to take up work in our homes, in our backyards, in our neighborhoods, in our city, in our state, in our country, and in the world.

And the work we are to be about, then, is God's own work of ending war.

We are called to end the war of anti-Jewish sentiment, of lies told about Jews, of misinterpretation and misapplication of scripture, of failing to wrestle with, apologize for, and learn from history.

If God's devastating plan is to end war, then let it begin! And let it begin with me! Now!

What is the weight of 65,000 words? Those words have the weight of the destroyed houses of pogroms in Russia, of stolen resources through oppression, inquisition, and general theft, of children who were denied resources because of their homes in ghettos, and the accumulated heft of bodies of murdered Jews through time, political dissidents, and others. That's what 65,000 words weigh.

It is no small thing- to decide to be on the side of God's work to end war.

It means, truly, to think about what Jesus would do. It means to pray to have a peacemaking heart, beginning in your closest relationships. This isn't a heart of enabling or accepting pain, but a heart that seeks to speak the truth, dismantle systems that create pain, and to work for the healing of the world.

This is hard work.

The work of war is easier, to be sure, because it allows the illusion of control and permits the inflicting of pain to those who are in one's way. War seems easier than peace because peace means a willingness to see, to accept, and to respond to the humanity of another person or group of people. Furthermore, peace means accepting that the other person or people are equally beloved by God and have also been justified (or made right with God)in the same manner as one’s self.

You, my friends of Lutheran Church of Hope, don't need my patience anymore. I have been called to a place that needs the end of different kinds of wars and needs my patience to help with that.

You have your gifts- your own desire to welcome, your gift of teaching and shaping pastors, your willingness to be generous with space, time, and money, every single person here and more. You know the wars that must end in Anchorage and in Alaska. The Holy Spirit is already guiding you.

This will be hard. And we will be sad. But our work will go on, because God will not let us stop.

But they can be destroyed with a single word.

God's love brought us together.

God's love will carry us forward.

God's love gives us good work for this world.

I love you. I am not God. My love for you wouldn't be enough, nor would yours for me.

God's own love for us is enough- enough for our strength, our hope, and our courage.

Enough to end the wars.

So very grateful for your eloquent words and speaking painful truth to history at this heartbreaking time.
Peace to you on your journey of service.
Lisa
Juneau: Resurrection Lutheran

Everything about this is wonderful. Blessings to you and your family on your new mission. It has been a pleasure to know and work with you. Our work continues, may you be immensely blessed in yours.

What powerful words, Pastor Julia! So much to ponder and to take to heart. I am thankful that I read that today.....and thankful for your presence among the Lutheran community here and among all who benefitted from your presence these last years! Peace to you and your family.