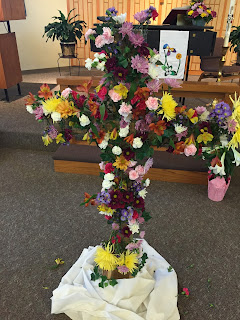 This sermon builds on the idea that the design of the sanctuary is to help us realize that we are safe there- baptized and safe in God's family, fed and safe with God meeting our needs, alive in Christ off the cross and safe because God is bigger.

It is one thing to tell children that sanctuary means safety and that everything in a church is designed to help us feel safe. It is quite another thing to try to convey that same idea to adults, particularly adults who are very aware of how church has not always represented safety or sanctuary for all kinds of people. Additionally, the words of the gospels have not always been used for comfort, consolation, or assurance of safety in God to people from a wide variety of backgrounds and circumstances.

The church has been unsafe at times for women, for divorced people, for children, for people who sought the gospel in their own language, for people who were anything other than heterosexual and cis-gendered, for people with disabilities, for depressed people, for sick people, for grieving people, for people of no faith, for newcomers, for minority races in majority communities, for those who struggle with addiction, for those who do not have work or much disposable income, for conservative people, for liberal people. If I keep going, it would mean acknowledging that for almost everyone in here, at some point, has felt or does feel unsafe or uncertain about their safety in church. Which means that the very thing we call sanctuary hasn’t always been that.

When that is the case, the church is nearly indistinguishable from the outside world. If this is not a fundamentally safe place, not a sanctuary, then people will look at the church and expect it to be violent in word and deed, untruthful, closed, oppressive, and dying. It is only when we remember, trust, and accept that the God of resurrection is all about the unexpected that we can be truly church- learning to live and die in Jesus and teaching others how to do the same.

We are called to remember, trust, and accept that:

- God does not repay questions or doubts with shaming, but meets them with experiences and teaching.

- God does not repay an attitude of oppression with oppression, but with freedom in heart and mind.

When the church imitates God, instead of the news or the powers and principalities of the world or even an insistence on tradition, when we imitate God- we enter into God’s tradition of life out of death, hope out of despair, truth from lies, and healing out of pain. The reality of the various resurrection accounts speaks to this.

The gospel writers are counteracting despair. Mark is writing for those who need to perceive how God’s kingdom was at hand, even after the ascension of Christ. When Matthew and Luke are writing, nearly forty years after the events of the day in question, the Temple has been destroyed by Rome. The followers of the Way of Christ are beginning to experience serious struggles. The Pax Romana, or Roman Peace, was only peaceful in that you could be left alone as long as you appeared to be cooperative in every way possible with the political leaders at all levels- keeping your head down, your taxes paid, and your mouth shut. There were wars or rumors of wars or quickly silenced insurrections with rebel factions disappearing into the deserts to try to live quiet lives of worship and devotion, which is an ironic way to rebel. The Fourth Gospel is specifically written for one of those communities, drawn together and attempting to live the Way of Christ according to the teaching of John the disciple.

These were desperate times, during which people began to despair-  the expectation of every day being exactly the same as the day before and the complete lack of expectation that anything can or will change. Doubt is not the same as despair because doubt is logic combined with hope. Doubt looks at the facts, but believes in a larger truth. Despair believes hope is lost.

For first century Christian, the resurrection accounts were written to remind them that their core story is an earth-shaking, ground-splitting, stone-moving, Rome-silencing event. The resurrection truth, their source of their life in community, is one that is designed to crush despair and feed the flame of hope.

Across the accounts, Jesus is not where you think he will be, does not appear first to whom you think he will appear, and does not go to the place you expect him to go. (Galilee of the Gentiles isn’t exactly the expected appearance location for a risen Messiah.) In the face of all of that, despair cannot flourish. It is shaken off its foundations. Despair needs suffering, oppression, and routine (the unholy trinity).
This brings the story to us.  We also live in a time of some leaders who act without thinking, think without studying, and study only those who agree with their worldview. We also know a world of competing military powers and oppression of the poor and marginalized communities. We know the exhaustion of attempting to alleviate pain and the feeling of frustration when we cannot gather the momentum to create real change. We need a place to feel safe and a place to draw strength for the work that our God leads us to and expects of us.

Nevertheless, we are a community who needs to hear resurrection words. We are also people who need to remember that resurrection is an event that affects the whole creation. It shakes up everything. We are embraced by a love and truth that will not let death have the final word. That reality changes everything. Resurrection is an event of forgiveness, an event of God’s on-going revelation of divine mercy, the power of the Spirit continuing to create and transform. The earth cannot keep still under the power of that kind of love. It might not be geologically correct to say that God’s response of love to human violence shakes the earth to its core, but it is theologically true.

Therefore, we do not despair. We keep the faith. It is not a faith that comes from seeing or even hearing. It is a faith that comes from God- God’s welcome, God’s inclusion, God’s hope, and God’s refusal to let the creation remain unshaken. God’s love is the same, day after day, year after year, eon after eon. That love is vast, however, that it contains truths that are beyond our comprehension- that death is not an end, that forgiveness happens, that all means all, that eternal love is exactly what it sounds like. The love of God gives us the sanctuary we seek and that we are called to offer to the world, most of all from this place. The vastness of the Divine Self encompasses all for which we dare to hope, in the light of which- despair shrivels.

And then we crush it completely- with voices that quake with joy and trust, “He is risen. Alleluia.”

He is risen, indeed.