The Sermon on the Mount continued-

- We are now into the ethical dimension of what it means to be salt of the earth and a light to the world
- What does the meekness that inherits the earth look like? What shape does hungering and thirsting for righteousness take in one’s own life?
- When Matthew is writing, after the fall of the temple, after Paul’s letters, after there is now a full generation of believers after Christ… what are the ethics of discipleship?
- In particular, Matthew wants to be sure that his readers (then and now) understand that following Christ has a rootedness in the law of Moses.
- The context of that root is not supersession (as in Jesus fulfills and, thereby, transforms the law), but cuts it open so that the heart of the law and God’s desire for its use is exposed. 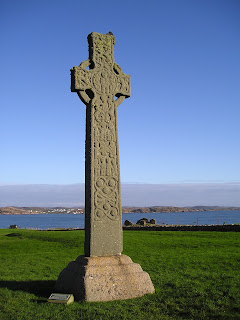 Framework
What would Jesus do? Matthew will go on to illustrate that, but he’s foreshadowing the kind of behavior that Jesus embody, which will seem transgressive and problematic to those who want the law to be followed strictly without regard to the need for wholeness in community.

Matthew’s interpretation of Jesus’ teaching, therefore, is to give an ethical framework that neither allows for unrestricted freedom in action (antinomianism) or idolizing of the law (legalism).

We want the law to be strict because it is easier to follow rules than to be loving.

It is easier to live for one’s self than for the community.

It is easier to perceive one’s own righteousness when contrasted with others than to pause to tenderly consider the pain we have compelled them to hide.

There is no “I” in common good- all actions are aimed toward the community, not the self (even self-care).
- Violent thoughts beget violent actions.
- Unforgiveness toward others leads toward doubting God’s forgiveness towards one’s self
- The use of others as means to sexual satisfaction (visually, physically, or commercially) leads to a breakdown of the value of sex as a gift from God and the body as a vessel of grace and sacramental action
- Adultery – mostly married women/unmarried men… violation of property
- Porneia- illicit sex?
- The common good requires honesty- about the difficulties of marriage, about mental health, about sexual ethics, about abuse of all kinds. Those who are embodying the Jesus ethics must lead the way in these conversations.

The small is as important as the big and the big is as important as the small.
- The truest ethic is a consistent ethic. A consistent ethic does not always mean consistent action. Some children need more structure than others. Sometimes a train of thought must be followed through multiple stops before a conclusion rooted in community good and God’s love can be determined.
- There will always be extreme examples- decisions made in poverty, war, grief, and in the midst of violence or threats of violence that will need to be treated tenderly and with grace and assurance of forgiveness.
- What is done at home must match what is done in public. What is done in the parking lot must match what is done at the communion rail. The Jesus ethic is a consistent ethic…

“God is love” (1 John 4:8) is orthodoxy and orthopraxy.
-The compass of the Jesus ethic is located within the incarnation… the actual body of Jesus… the physical human nature of Christ… It is the extreme nature of God’s love made flesh and dwelling among us in commonplace elemental reality that makes the Jesus ethic applicable all day, every day.
- orthodoxy- right belief
- orthopraxy- right faith
- These two cannot function apart from one another and are the original chicken and egg…
- This is the grounding of discipleship- our following in the Way of Christ- and therefore the true north of a Jesus ethic.
As I read this week about ethics and the Sermon on the Mount and marriage and divorce and oath taking in the first century, I thought of all the ethical dilemmas that are proposed in these sorts of situations. I thought of how likely we are to take this text, remove it from its context, and shame others or ourselves with it.

We must wrestle with making our every thought align with the truth of Jesus—the executed, resurrected Christ who sustains all life and who reconciles all things. ~Drew Hart (The Trouble I’ve Seen)

The truth is that most of us want short, pithy clarity that doesn’t require moral pondering, deep prayer, or hard conversations. All that does, though, is make a new law. It takes time and practice to shape a life according to following Christ. Time is the thing that we are consistently presented as not having enough of, running out of, killing.

For most of us, a life lived in the imitation of Christ, in embracing a Jesus ethic- for most of us, that life is not going to take a quietist, plain sort of shape. The choice is not – be cloistered or be a flagrant sinner. The choice is actually much tougher, it is either to put ourselves, our knowledge, our desires and will above God’s or to embrace what God has done for us and to respond with a Jesus ethic.

At work, at the drive thru, in competition, at the doctor’s, when voting, on social media, when playing sports, on-line shopping, in speaking to your family, in speaking to strangers, in writing letters to the editor, in protest, in support, in worship, and at rest…

The grace we have received compels us to be open to the way a Jesus ethic shapes our lives. One decision leads to another to another to another as we are saltier and lighter and more woke and more open and then we find ourselves blessed and among the ones who are receiving mercy, inheriting the earth, and being filled.

Email ThisBlogThis!Share to TwitterShare to FacebookShare to Pinterest
Labels: Ethics, Jesus, Matthew, Neighbor Love, Sermon, Sermon on the Mount, What would Jesus do, Year A