Thirty-five days ago, I left Poland. It has not yet left me and I don't really expect that it will. I am still sorting through what I saw, felt, heard, and experienced. Some of these things may take years to put together and some I may have already forgotten. Only God knows how these things will finally take shape or root within me.

There is one experience that I actually continue to think about almost daily. Going in, I thought about this with almost anthropological interest, but very little emotional attachment. Yet, now, I think of it constantly. When I think of this situation, I feel grief and frustration, sadness and hurt, impassioned and, yet, paralyzed.

On Thursday, May 26th, Roman Catholic Poles, along with Roman Catholics around the world, celebrated the Feast of Corpus Christi. In Krakow, the Friend of Calvin who came to visit me and I were interested to see the observance of this feast. It is a national holiday in Poland with many shops and places closed for observance. There is a procession from Wawel Castle to Krakow's Main Square and St. Mary's Basilica.

The procession involves a priest carrying the Host, the consecrated bread of communion, in a monstrance under a canopy, which is itself carried by deacons. Behind the priest is a procession of hundreds, if not a thousand, people. There were soldiers, nuns (so many nuns), monks, priests, bishops, first communicants, town elders, town leaders, church leaders, Roman Catholic bishops and archdeacons, and probably several groups that I missed or don't know how to classify. 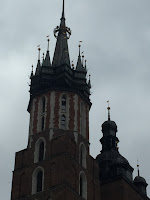 Krakow's Main Square, one of the largest in Europe, was filled with people who were not in the procession, but who came to see it, to honor the Host, to hear the sermon (presumably about Holy Communion and the presence of Christ. It was in Polish), and to receive communion. People stood(!) on pavement and cobblestones to listen. There were young men in dress shirts, ties, and dark slacks, wearing portable speakers to broadcast the sermon all around the square so that all could hear.

As the sermon concluded, the priest carrying the host (at the very front of the procession), began to move again- toward the Basilica and the altar. As the monstrance passed, people knelt. Some bowed deeply, but others fully knelt on the cold stones, crossing themselves. Some wept and stayed down. Others stood again after the Host had gone by. These people were acknowledging what they believe is the Presence of Christ, the Real Presence, in the wafer framed in the monstrance. (See the pic above for an example of an empty monstrance.)

I was pulled along in the crowd until I realized I was very close to where communion was going to be celebrated. Suddenly I realized that not only was I not in the right frame of mind to observe this, but that there were people behind me who would like to be closer. So I moved through the tightly packed crowd back to the more open air of the square, toward the clock where my friend and I hurriedly gestured that we would meet. 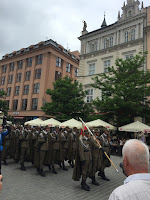 In chatting, we decided to go for a coffee, but when we sat down at a table in the square, I ordered bison grass vodka and apple juice. In a rare moment of actually feeling my feelings at the time they were occurring, I realized that I was mad. By this time in my trip, I had toured Jewish history sites in Warsaw. Friend of Calvin and I had gone to Auschwitz and Birkenau just two days before Corpus Christi. In all my reading, I knew that Poland (not alone in this) has not ever dealt fully with its anti-Jewish history (or present). Due to Germany's attack on Poland, most Poles felt/feel that they were more sinned against than sinning in World War II (and preceding), despite the complicity of Polish men and women in turning in their Jewish, homosexual, Roma, and "political" neighbors. Poland does not acknowledge complicity in the Holocaust, despite making money through "dark tourism"- the thousands of people who travel to see the concentration and death camps each year.

Additionally, Poland is currently struggling with government leaders (and communities) who want to keep their borders closed and reject immigrants. Anti-Jewish activities have seen a rise in the past few years, as well as anti-immigrant displays and commentary. All of this knowledge, of this awareness, of all the grief, came swirling into a head as I poured cold vodka down my throat and thought about the procession I had just seen. 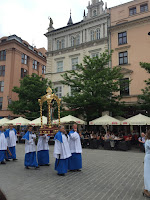 People had reverently, tenderly, carefully acknowledged the presence of Christ in pressed bread, but would they do the same to their neighbor? Had they done the same in 1942 or 1968 (Polish Jewish Exclusion) or today? The Feast of Corpus Christ is nearly 1000 years old. This means that Poles (and others) likely observed this same procession in the German occupation. There were probably soldiers and others who knelt, receiving the body of Christ in their mouth, and then rose to go back to the hideous work of the war and its atrocities.

Christ is as present in the host, in the bread and wine, as he is in the person next to us. Furthermore, He is as present therein as he is IN us as we do anything in his name. 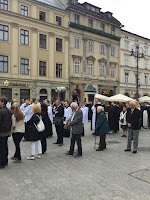 We want to believe that we would be different. That we ARE different.

At least, I assume we do.

Most of us, though, still kneel reverently at the altar and, with Christ's body still in ours, make excuses for why we do what we do, say what we say, think what we think. It happens all the time.

How do we change that? What are the words, the steps, the turning that need to be done?

If Christ's presence in communion does anything, it gives us the strength to make that change. The power is actually IN us when we commune. We just have to be willing to join into the work, to participate in the change, to bear the cross of truth and to lift it high.

It seems likely that a very, very, very tiny percentage of people present in Krakow on 26 May 2016 were also present in that same procession in, say, 1943. Yet, the repercussions of the actions against Jewish neighbors and others, before and after, still reverberate through that country. And the repercussions of what I witnessed and felt on that day still reverberate through me.

1: <3
2: "Feed on Christ, and then go and live your life, and it is Christ in you that lives your life, that helps the poor, that tells the truth, that fights the battle, and that wins the crown." ~ Philips Brooks
3: I love that you called Nikki "Friend of Calvin." lol.

Saw a link to your post on the RevGals site. Thanks for sharing your perspective. You've made me think.