Habit of a Decade 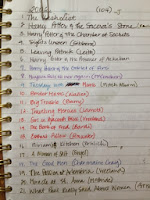 In trying to get back into regular writing, I'm revisiting NaBloPoMo (National Blog Posting Month). The July theme is "decade", so be prepared for some random posts on that theme when I can't think of anything else to write.

The only habit I've sustained for that long in consistently the same way is tracking what I read. That's actually a 12-year-old habit. In 2002, I set the goal of trying to read 100 new books each year. This was to break my serous re-reading habit. 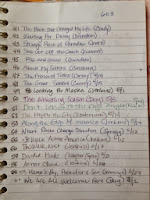 The lists tell me more than they tell you. Without looking at the year page, I know this is from 2007. I remember the voracious appetite I had for anything that would distract me from Robs impending deployment. Home from Yale for spring break, plus an extra week together, I remember hours at the library and curled on our couch during his work hours.

Many of the titles conjure up not only some details of the book, but also where I read it and what I was doing. My fifth book in 2011 was also my 1000th new book, since 2002. That felt amazing!

What was it? The Fortune Cookie Chronicles by Jennifer 8. Lee.

Wow. I have never tracked like this. I should try it!!

I have been doing the same thing, since 1997, although I've never gotten close to 100 a year! Wow! In the thirties has been my best. I also plan to post something about this habit during this month. I'm glad to find out there's someone else like me! Good to meet you and join you on this 31-day journey!