Dorcas over at RevGalBlogPals encouraged some general sharing today and I've been longing for the perfect...something... to get me back to regular writing.

She writes: Share five things that are happening in your life, personally or professionally or some of each, in this season of life.


1. Exercise! In training for a triathlon in June, I managed to push myself from seeing as exercise as something I needed to do to something that I enjoyed. It has become something that I need to do. I bought a bike rack and drive with my bike on the back of my car at all times and I keep gym clothes and a few shower items in a bag in the car. This past Sunday, I managed to grab a 6 mile bike ride in between services (morning and evening) and visitations! I felt great. I'm really trying to get my tolerance and speed up so that when I have to go back to the gym in the winter months, I will be faster and leaner. I do miss my weight-lifting, so that will get back on the agenda when the weather is cooler too.

2. Toddler love: My son is not-quite 2 years old, but for sure the cutest thing I've ever experienced. I love his soft neck, his giggle, his excited discoveries. He yells in the car about what he can see and we're in a "buck" phase. Buck= truck. There are a lot of bucks around. It's never been easy to leave him and go to work, but it is so much harder to leave a toddler than an infant. I'm making a kissy-face right now in my office, thinking about how I will just squish him when I pick him up in about 45 minutes.


3. Bible exploration: I'm big on the book of Judges, which was left out of this year's narrative lectionary passages. I'm trying to figure out how to slot one of those stories in and which one. The bonus of Deborah's story is that it includes two powerful women, but it's early in the book. I once wrote a paper on Jepthah's daughter's story as the hinge of the Old Testament, but that's a different kind of preaching. I'm thinking, maybe, Gideon. Pondering, pondering... 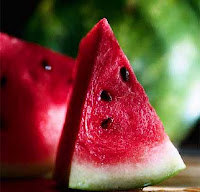 4. Watermelon: Don't tell my nutritionist, but I haven't quit the watermelon. I'm supposed to stick to the higher fiber, less sugary fruits. She wouldn't actually be surprised, though, because I told her I would still eat watermelon in season and I refused to feel guilty about it. If you are going to take watermelon, garlic or lemons from me... I might as well throw in the towel now. Blech. No watermelon in Alaska tastes like the sun-warmed watermelons of my Southern youth. I can only get decent watermelon in the short season when we get them from California. So I'm eating it while the eating is good. I would say you can have my watermelon when you pry from my hands, but I'd stab you before you got that far. (Not somewhere too essential, but serious enough to be a distraction while I finish the melon!)


5. Ecumenism: Our congregation is starting to do more and more with the United Methodist Church up the street, which makes sense in many ways- not the least of which is our mutual love of Jesus! (Imagine that!) However, I'm surprised at all kinds of ecumenical gatherings when so much of the time is spent rejoicing in how alike we are and how small are our differences. How true.

What fun to have a toddler! I am impressed with your future triathalon. Wow! Good for you.

I may write about five things tomorrow...either in blog form, or on paper and send it to someone. Thanks for the inspiration.