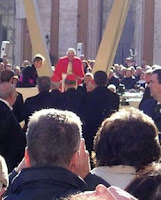 This picture is from Dec. 2005- when I was in Rome and present at the weekly papal audience.

As I write this, I am sitting in the Minneapolis-St. Paul Airport. On my way to my gate, I passed four or five nuns and sisters. That is a little unusual for me. I know a few, but I hardly ever see them. The ones I saw this morning were visible because they had habits or suits and head coverings. So I might have also passed sisters who don't have designated dress.

I'm always fascinated by nuns and sisters, especially today. As I walked behind two Dominican sisters, in their distinctive habits- I thought about why I was traveling this week. A week ago today, I received approval from the NC Lutheran Synod for ordination. This was a very big step in my vocational life and I have been pondering this all week. It burns in my heart as I walk behind women who also took their vocation seriously. Their dedication to God goes to the extent of vows of poverty, chastity and obedience and while my vocational life requires dedication- it's not to the shutting out of other life choices and options.

The reason there were so many of these women in the airport, I think, had to do with the visit of Pope Benedict XVI to America. As I walked through the airport, all the televisions were playing, live, the pope celebrating a "historic" mass in St. Patrick's Cathedral in New York. I walked past screen after screen of this well-known man offering well-known words and absorbed the images in my mind.

Beyond the fact that I couldn't take communion at St. Patrick's (very strict Catholic cathedral), I held in my heart the significance of the Mass itself and the sacrament of communion. As I found my gate, people were coming forward to receive the sacrament from the Pope and other clergy. A cantor began to sing the hymn, "I am the Bread of Life."

In the meantime, we strive on together- praying for the work the Spirit is doing through us (including the pope) for the unity of all people.
Posted by Pastor Julia at 9:10 AM