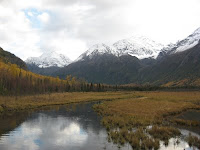 As this vivid season begins, tell us five favorite things about fall:

First I should comment for the majority of my blog readers (in Alaska), we know in our heart of hearts that fall is nearly over, not just beginning. The snow on the mountains creeps ever closer to my house in the Eagle River Valley. The first snow that appears on the hills in called "termination dust" in Alaskan parlance... and I'm not totally sure why. I think it's because it represents the sure termination of summer; however, my husband thinks the name comes from the fact that the snow "kills" everything it on which it falls. That being said... a few thoughts on fall as prompted by the RevGalBlogPals site.

1) A fragrance
What does fall smell like? I think the smell of wet leaves and the smell of animals. I know that the moose and bears are traveling through my yard these days- my little doggy lets me know when they pass by. And when I take him outside, we both sniff. I only smell wet horse (moose?) and rotting leaves, but his little sniffer takes in a lot more, but he doesn't share his discoveries. Though it's not a smell, I love sharp, crispness of the air and how it feels in my nose.

2) A color
At the tops of the mountains, just above the treeline and below the termination dust, there is a deep rust color. It's probably the blueberry and cranberry bushes (and some fireweed) turning before the frost. It makes me think of Nome and fall tundra colors- easily rivaling the beauty of trees everywhere. For me, nowhere ever feels like Nome in the fall- the peeking moose, the running bears, the crisp, crisp air.... Ah, memories. But I do like trees and the sharp orange of the birches in Eagle River has its own special beauty. Want to go for a drive?


3) An item of clothing
Fall means I can wear the bright jewel tones in the sweaters I've missed all year. I love the colors of fall and the feel of sweaters and light layers (far different than the needs of January and February). I also get to break out the corduroy- in jackets, pants and skirts! I love my fall/winter clothes and the advent of cool weather means they're in the closet to stay- at least until April. 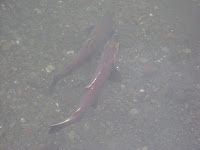 I like to go to the Eagle River Nature Center, kick up a few leaves and say good-bye to the last of the summer's salmon. At the end of September, there are sometimes a few beaten-up sockeyes and cohoes which have made it to the end of the line and the end of the run. They have completed their mating dance and their tails swish in tired rhythms. They're fascinating to watch and to me, it's like they bring winter- the last little fishes coming into to lay their eggs and pass their hope to the future, which lies in a spring they shall not see. (Is there a lesson in this?)

5) A special day
If I had to think of a particular fall day, I would remember meeting my husband in Nome, bear hunting with him a year later and deciding we were going to make our relationship work for a long time. Fall is a season of anticipation for me: at this time last year, the coming of fall meant being even closer to his return from Iraq. He's scheduled to go again next year and I expect fall will mean the same thing to me at this time in 12 months. Fall has always been a restless and energetic time for me. Maybe I'm gathering my nuts for the winter ahead or maybe this is just my favorite season and I respond to it.
Posted by Pastor Julia at 6:32 PM

Ah, gathering the nuts, what a great image!

Oh, I love all your nature images! And I'm so with you on corduroy--as much as I love summer, there's something cozy and hopeful to greeting winter, knowing Easter is on the way. Be blessed!