You who bridles untamed colts,
Who gives flight to birds,
Who steers ships along their course,
Tame our wild hearts,
Lift our souls to you,
Steer us toward the safe harbor of your love.

King of the saints,
Invincible Lord of the Father,
Prince of wisdom,
Source of joy,
Savior of our race,
Cultivator of all life,
Guardian of our desires,
Whose sure hand guides us to heaven.

Fisher of mean,
You cast out the sweet bait of your gospel,
You draw us out of the waters of sin,
Shepherd of men,
You call us with your sweet, gentle voice,
You invite us into your eternal sheepfold.

Fountain of mercy,
Light of truth,
Faith without limits,
Love without end,
Exemplar of virtue,
Proclaimer of justice,
Leader of men,
Your footprints show the way to heaven.

cross-posted at RevGalPrayerPals
Posted by Pastor Julia at 8:30 AM No comments:

Mary Magdalene, Apostle to the Apostles

This past spring, a mom from the preschool came back into the church after dropping off her child. In the corner of our parking lot, she had found a woman bent over and crying. Bringing her into the church office, the mother said that the woman was in pain from a broken tooth. The woman was obviously in a lot of pain and had sores on her face and her hands.

She said that she had been in so much pain she wasn’t able to work. When we asked what she did, she looked at us and said, “I’m a working girl.” She waited for the judgment we didn’t have time to give because we were trying to figure out how to help her. The mom offered to drive her over to Safeway for some Orajel (pain killer) and some food. In the meantime, I made calls to find some help. I tried the Mary Magdalene center, but got no answer.

I called LSSA and received the names of some dentists who might do low-cost or pro-bono work. However, we concluded that the entire situation might be better if we could get the woman to go to the emergency room and perhaps receive care, food, and contact with a social worker. I did not think we would end her professional career that day, but I hoped we might offer some light.

Eventually, the mom came back to the church alone and very upset. After receiving the medication to make her tooth stop hurting, the woman wanted to go back to work. She was worried about the people who had her things and to whom she owed money. It was tough to console the mom who returned, who had been so hopeful that we would be able to save the woman. She cried to me, “How could she want to go back?”

Because she does not know anything different right now, I said, but you helped her see a little something different today. And that will stay in her mind. It is hard to watch people who really want to help feel rejected and confused, but it happens in the work of reaching out to people in a broken world.

I kept thinking about both those women this week when I was pondering Mary Magdalene in my heart- the bruised “working girl” and the very clean-cut preschool mom. As most of you know, I have a personal crusade to make it known far and wide that in the gospel accounts, Mary Magdalene is NOT (NOT!) a working girl (prostitute). In church history, she’s often been conflated with Mary of Bethany and the woman who anoints Jesus’ feet. While this did narrow down the number of characters in the Scripture, making it easier to keep everyone untangled, it gave Mary Magdalene a reputation she didn’t earn and threw into the shadows the one she did.

In Luke 8, Mary (called Magdalene) has seven demons cast out of her by Jesus and then she, with several other women, begin to follow him as disciples. There is no mention of what the demons were. Presumably, like other demons encountered in Scripture, they are afflictions that prevent her functioning in society. They could be things like depression or anxiety, things we might recognize as psychological. They could be physical ailments- bleeding, epilepsy, screaming fits. They could be Satan trying to prevent her from becoming the instrument of God that she’s about to become.

Nevertheless, she is freed from these demons and follows Jesus. Imagine what that was like for her. She had been invisible to society and now, suddenly, she was seen and known by the eyes of God in Jesus. She was restored, not only to wholeness, but to companionship, to community, to communion. Her body is whole because the body of Jesus, the body of God, came near and brought her consolation and healing.

After her exorcism, we next see Mary Magdalene at the tomb. And she’s there in all the gospel accounts. She will not abandon the body that brought her own self back to life. Sometimes she’s with other women, sometimes she’s the first one there. I occasionally wonder if she ever left after Good Friday- after they laid him in the tomb. Maybe she never went home, but lingered in the shadows, in fitful waking and sleeping and sobbing, until Easter morning.

This is the story that people need to know about Mary Magdalene. That she encountered the risen Christ and that she, she, carried the good news of resurrection to the other apostles- who were hiding in fear. That Jesus ate with prostitutes and tax collectors are facts that we can get from other stories and other characters. We do not need that good news from Mary Magdalene.

What we need from her is the tower of faith that stood in grief by the tomb. The pillar of strength that recognized the face of her teacher, her rabbouni! The urging of the Spirit that hurried her feet over packed roads, singing, “He is risen! He is risen indeed!” The truth people need to hear about the story of Mary of  Magdala is not an exaggerated claim about what she might have been, but the bare facts of who she was- the Apostle to the Apostles, the first post- Easter evangelist, the foundation of the church because of the story she carried.

If we elevate her too much, we risk her seeming too saintly, too out of reach. Yet, with Mary Magdalene, I do not think that will happen. When the other apostles seem uncertain or bombastic, unfaithful or confused, the eyes of the church turn to Mary Magdalene- who had real, physical experiences of healing, forgiveness, and hope.

Through the words of the first preacher, Mary Magdalene- who dared to follow Jesus, who dared to stay at the foot of the cross, who was prepared to honor the body of her Lord fallen- but met that body risen. Her story needs no embellishment or conflation, but it is powerful through the test of time. And if we dare to be like her, to trust in the healing that we have received and to seek the risen Christ, our story will stand as well.

People want to know God’s history, and how will they hear it unless someone speaks it to them? People long to know that a light shines in the darkness and the darkness has not, cannot, will not overcome it.

He is risen indeed.

Amen.
Posted by Pastor Julia at 1:42 PM No comments:

In trying to come up with a bulletin cover for this Sunday, we made a Wordle of the Ephesians 1:3-14 reading. 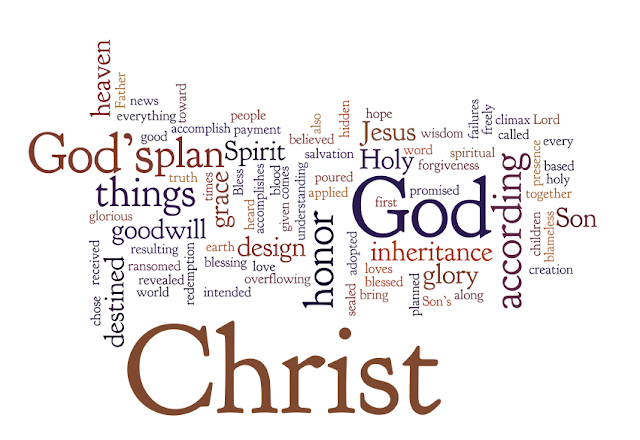 Those are the top 100 words from the reading. Clearly, Christ is the main word. Surprise! Yet, I'm drawn to the verbs- destined, ransomed, intended, blessed, sealed, adopted, believed, chose, received... Almost all of these refer to God's actions toward us (and all creation) through the Living Word, through Jesus, through Christ. We are often too quick to list or listen to harsh verbs about God's action. God does get angry (see: Amos, Ezekiel, Jonah), but typically with just cause. Yet, God's modus operandi- FROM THE BEGINNING OF TIME- is not anger, but relationship. The verbs of Ephesians 1 reveal that desire- choosing, blessing, adopting- in a way that we should sit with, respond to, and ponder in our hearts.
Posted by Pastor Julia at 12:54 PM No comments: