Which Way To Go

Fair to the Flag

More than once recently, I've been asked my opinion regarding flags in the sanctuary. I've written about my respect for the flag here, but I'd like to address the specific question directly.

Regarding flags (national or otherwise) in the sanctuary of a Christian church: I do not believe this is fair to the flag.

The United States Code (the US Flag Code) states the following:


It can be inferred from the document that "superior prominence" means to other flags. Where the flag of the United States is present, it is meant to be the unifying symbol for those who behold it. The proper display of the flag is meant not only to stir feelings of patriotism but also a sense of pride and shared community history and goals. That is the job of the flag.

The flag cannot do that job in a Christian sanctuary. The specifically unifying symbol of a Christian sanctuary is the cross of Christ. It is the symbol of his resurrection- thus drawing our hearts and minds to his birth, life, teaching, miracles, ignominious death, and God's power above all. The death of Jesus came at the hands of government officials and the wishes of religious people- all of whom sought control over the power and mercy of God as revealed in Jesus the Christ. The cross is the most powerful symbol wherever it is present.

Thus, the flag would be, at best, second to the cross.

In a sanctuary or chapel, however, the cross is rarely the only symbol of Christ's faithfulness and God's demand on the lives of the faithful. The presence of a baptismal font and/or an altar on which Holy Communion is served are also symbols of God's promise, God's presence, and the power of the Holy Spirit. The events of baptism and communion drive us back again and again to the Christ who feeds us and unites us as children of God. We are made into a community with the saints on earth and the saints who have gone before through the font and the altar.

With their presence, the flag slides to fourth.

Then there is the written Word, the Holy Bible, which people died to have translated into the vernacular. Scripture in the language of the common people represents the lives and works of men and women who believed that God speaks directly to everyone through the Spirit. The power of the narrative of Scripture belongs where it can be read, discussed, wept over, wrestled with, and treasured. Martin Luther wrote that we cannot begin to value the Bible enough until we have studied it for 100 years.

Now, the flag is fifth.

Jesus says,  “No one can serve two masters; for a slave will either hate the one and love the other, or be devoted to the one and despise the other. You cannot serve God and wealth.” Matthew 6:24

I am not arguing that the flag of the United States represents wealth. Jesus isn't discussing flags here, but the first part of the verse remains decidedly true regardless of the topic of discussion. When we are in a Christian sanctuary, we are Christ's first. (That's actually true everywhere.) In the church, we are children of God- not our denomination, not our city, not our country, not even our own family. We belong to God and it is God's demands on our lives that must and do take precedence.

You can have more than one vocation at a time and the vocation of responsible citizen is one that I value and take quite seriously. All vocations, however, are subsumed into the primary one of being a baptized child of God, which is always our primary identity.

When I examine those vocations in their proper order, I am stirred by the Spirit to be sure that I am treating the flag of my country respectfully. Thus, I do not wish to display it in a place where it is of fourth or fifth prominence. I wish it to be displayed where it can rightfully do its job and that place, in my mind, is not in the sanctuary of a Christian church.

Posted by Pastor Julia at 12:13 PM No comments: 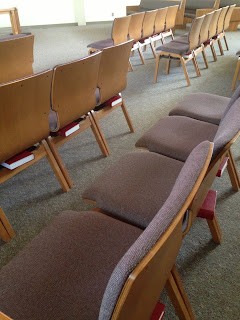 Be careful that you don’t practice your religion in front of people to draw their attention. If you do, you will have no reward from your Father who is in heaven. Whenever you give to the poor, don’t blow your trumpet as the hypocrites do in the synagogues and in the streets so that they may get praise from people. I assure you, that’s the only reward they’ll get.  But when you give to the poor, don’t let your left hand know what your right hand is doing so that you may give to the poor in secret. God who sees what you do in secret will reward you. – Matthew 6:1-4

There are a lot of things happening in this passage. First, financial generosity is equated with religion. So, in some capacity, Jesus expected that the doing of faith would involve the giving of money, in addition to time and talent.

Second, one’s own giving should be generous enough that one might be tempted to tell others but instead must keep it secret. If you were ashamed of what you were giving, Jesus wouldn’t need to warn about secrecy since we don’t often shout about our embarrassing bits.

Thirdly, financial giving is for the sake of the poor. While Jesus says elsewhere that the “poor will always be with you”, his meaning is that giving to the poor is not a convenient reason to avoid other justice work. One can work to feed people and also work to convey dignity and opportunity on a larger scale. Whether or not people take advantage of that work is not our business.

Lastly, Jesus indicates that there is a reward for appropriate generosity. What kind of reward? Who can say, but it will come from God. This is both incentive and reminder. We cannot use our generosity in fiscal stewardship to manipulate God (if I give this, then You do this…). We are managing what has always (and still) belonged to God’s own self.

We are given the gift of caring for others and God’s whole creation through our baptism. Our financial stewardship is of a piece with that gift and call. Let us be diligent together, even in private, about our generosity with what God has given us.
Posted by Pastor Julia at 11:54 AM No comments: