When I heard Julia Scheeres had a new book coming out, I jumped on it. I read  her memoir, Jesus Land, several years ago and found it fascinating. I was even more eager to read the new book: A Thousand Lives: The Untold Story of Hope, Deception and Survival at Jonestown. I was not disappointed. Scheeres was working on a novel about a charismatic preacher from Indiana, when she looked up Jim Jones and then discovered the released, but untapped FBI archives, audio files and documents, of Jonestown.

In her introduction, Scheeres writes, “I believe that true stories are more powerful, in a meaningful, existential way, than made-up ones. Learning about other people’s lives somehow puts one’s own life into sharper relief… You won’t find the word cult in this book, unless I’m directly citing a source that uses the word… The word cult only discourages intellectual curiosity and empathy. As one survivor told me, nobody joins a cult.”

As I read this book, that last sentence came to me over and over: “Nobody joins a cult.” The book opens with a brief description of people arriving in Guyana to go to Jonestown. It quickly flashes back, then, to the early life of Jim Jones and his attraction to the church. He was drawn to the power and attention given to the man behind the pulpit and the physical aspects of devotion in Pentecostalism (speaking in tongues, slain the Spirit, dancing and prophesying). He began preaching in his late teens and proclaimed a message of God’s call to racial integration. 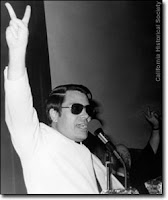 It was Jones’s push toward racial harmony that drew people to his church. In the book, many people recount how the Peoples Temple Full Gospel Church was their first encounter with black and white people worshipping together. The success of Jones’s ministry and its focus on neighborhood service drew much attention and many accolades. Many people were willing to give freely to such a mission and that initial dedication is what many of his followers would recall when they later thought Jones was straying from his message and, possibly, his sanity.

Jones later proclaims himself as “the one they call God” by denouncing the violence and segregation of the Bible (he repeatedly points to its “support” of slavery). When he moves his congregation from Indiana to California, everything becomes about loyalty to him. Even in the Indianapolis congregation, Jones presses people to lie on the floor one Sunday to test their trust in and faithfulness to him. This is one of the first signs of his maniacal behavior and the demands he will place on his followers. Even as evidence of Jones’s deceptions and pressures became evident, Scheeres writes:

True believers had an answer for everything. They excused Jones’s peculiarities with the maxim, the end justifies the means. The beatings, the swats- it was all showmanship, they said. The disciplines didn’t really hurt. Jones’s antics- like stomping on a Bible or [swearing during a sermon] – were all theater. He likes to get a rise out of people to force them to pay attention. Those members who were offended by his increasingly bizarre and cruel behavior kept quiet, and in their silence, seemed to condone it. (p. 88f)

Eventually as people move to Guyana, the book becomes like a horror movie. I could barely contain myself from screaming, “Don’t get on the plane! Escape through the jungle! Don’t eat the sandwich! Don’t drink the Kool-aid!” That last line is what most people know, if anything, about Jonestown- that nearly 1,000 people died there in November 1978 because they followed their leader, who was obviously crazy. People who are old enough to remember the story may recall a few other details- the number of children killed, the assassination of Congressman Leo Ryan, the pictures of the dead spread out in a field. 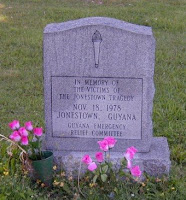 “Don’t drink the Kool-aid” is hardly the complete legacy of Jonestown, idealized to many who died there as a socialist paradise where everyone contributed and received according to their abilities and needs. Even as Jones obviously unraveled, people alternately agreed with him because they believed in the truth he had preached at one time or because they want him to leave them alone. Jones held two suicide “drills” in before the actual incident. People were routinely harassed into voting to “support revolutionary suicide” so many times that it ceased to become shocking. You know the ending to this book, but you don’t know the story.

One thing that I kept turning over in my mind as I read this book was the knowledge of the cults we have seen and that continue to exist since Jonestown. A thousand people died, manipulated to death by a drugged madman convinced he was God. And since we’ve had Branch Davidians, Heaven’s Gate, and several others (names intentionally omitted). My inability to complete the previous sentence in the way I want brings me to my point in recommending this book: just because people are clean and tidy or are technically protected under the First Amendment doesn’t mean they are not in a cult. No one joins a cult, but almost no one is able to voluntarily leave one. If you’re like me at all, names and pictures are coming to your mind of current organizations, supposedly religious in nature, that manipulate, mentally torture and extort those who join.

When we dismiss the people of Jonestown as weak-willed, we are ignoring the truth that history repeats itself and the only way to stop the cycle is to speak the truth. Loudly. Frequently. In all times and places (or close to it). Many people are still  surprised to be encouraged (or allowed) to ask questions in church and to examine the truth in which we claim to believe. Our ability to question and even doubt does not undo what is true, especially about God. The more questions are encouraged, the less anyone person can claim to have all the answers. That can be unnerving, but it can also be empowering. And it’s the only way to prevent the success of cult mind control.

A Thousand Lives gave me the shivers… because of what’s in the past and what could easily be in the future. Probably not a book for a women’s circle, but possibly good for your book group, for fans of true crime or contemporary history, or anyone who wonders how things like this could (and do) happen.

A version of this review first posted at RevGalBlogPals on 10/24/11.
Posted by Pastor Julia at 11:48 PM No comments: