To Tell the Truth

Rachel Held Evans is a writer, blogger and speaker. Essentially, she does what I'd love to do if I weren't loving what I was currently doing. (Or something like that.) She wrote the following on her own blog today:

First, the brilliantly titled Epic Fail Pastors Conference, born from the question “What if we offered a space that is gutsy, hopeful, courageously vulnerable for pastors to let go of the burden to be a Super Pastor?” Second, a candid talk from David Felton at Big Tent Christianity about how pastors are often afraid to share what they are learning about the Bible and Christianity with their congregations for fear or recourse. (David recalled one pastor who reached retirement and said, “Now I can finally say what I really think.”) And third,the increasing number of pastors who contact me to say that they have doubts too, but can’t tell anyone about them.

Tell us the truth.

Tell us the truth when you don’t know the answers to our questions, and your humility will set the example as we seek them out together.

Tell us the truth about your doubts, and we will feel safe sharing our own.

Tell us the truth when you get tired, when the yoke grows too heavy and the hill too steep to climb, and we will learn to carry one another’s burdens because we started with yours.

Tell us the truth when you are sad, and we too will stop pretending.

Tell us the truth when your studies lead you to new ideas that might stretch our faith and make us uncomfortable, and those of us who stick around will never forget that you trusted us with a challenge.

Tell us the truth when your position is controversial, and we will grow braver along with you.

Tell us the truth when you need to spend time on your marriage, and we will remember to prioritize ours.

Tell us the truth when you fail, and we will stop expecting perfection.

Tell us the truth when you think that our old ways of doing things need to change, and though we may push back, the conversation will force us to examine why we do what we do and perhaps inspire something even greater.

Tell us the truth when you fall short, and we will drop our measuring sticks.

Tell us the truth when all that’s left is hope, and we start digging for it.

Tell us the truth when the world requires radical grace, and we will generate it.

Tell us the truth even if it’s surprising, disappointing, painful, joyous, unexpected, unplanned, and unresolved, and we will learn that this is what it means to be people of faith.

Tell us the truth and you won’t be the only one set free.

The comments that follow her post are from many pastors (or pastor's family members or church leaders) who say this sounds great, until people threaten to fire you or actually do fire you. I'm from a family where a pastor was "forced to resign" because he tried to do what was right- both by members of the congregation and by his family. I suspect the people involved don't know the toll these events took on me and I don't fully know the toll it took on them.
And, still, I became a pastor.
And, still, I struggle to tell the truth. I make an effort to say that things are difficult or lonely. I mention myself as an example of sin and not sainthood. I constantly hold out benchmarks of spiritual development for myself and find that it takes me longer than I expected to reach them.
I say no sometimes. I do say I don't know. I lay out traditional approaches, contemporary understandings, and the basis from which I operate.
I sin boldly and then, by God, more boldly still.
And, yet, I think I do hold back. I wait. And I don't always thinks it's my decision. The Spirit is always at work and I may not be where God wants me to be on a particular issue yet. I may be shaped by the faith of those around me, even as I am part of shaping theirs.
I think most people CAN handle the truth, but some, pastors and lay, still struggle.
The life of faith is a mystery- simultaneously being unveiled and becoming deeper. About the time we wade in a little further, God does trouble the water. I, like everyone, have sinned and fallen short of the glory of God. And I'm just trying not trip anybody else. And that's the truth.
Posted by Pastor Julia at 4:31 PM 2 comments:

This week's prompt: 5 perks/gifts of ministry (for me)

1. Flexibility: Part of the reason I'm writing on Saturday is because I took Friday off (for the most part). I worked on Monday and so I shifted my schedule. Though there are occasional very, very long days- they don't occur with horrible frequency. I can also work early in the morning and late at night, which allows a little more time with my family than another 40-50 hour a week job might. It's a gift and I'm grateful.

2. Music: People assume the pastor will sing hymns all the time. So I do. Sure, Sondheim is a little more difficult to explain, but... how can I keep from singing?

3. Debate: I like to discuss, vigorously, the Bible. Frequently. Ministry gives me the frequent and vigorous options.

4. Teaching: I like teaching. I like seeing someone grasp a new thought or idea. I like watching the truth be absorbed. I like thinking about things in a new way so that I can teach more effectively.

5. Location, location, location: I like to be where I know that the Spirit is. The most tangible locations are at the beginning of life and the end, at the Table and the Font, at quiet lunch and boisterous potluck and many other places. Whether cutting back raspberries, weeding, vacuuming, dish washing, walking or dog blessing... one of the perks of ministry is being invited into seemingly simple spaces and watching God make the conversation sacred. I try not to get in the way.
Posted by Pastor Julia at 6:19 PM No comments:

For God, For Country and For Yale 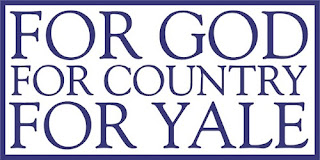 That's one of the mottos of the university from which I received my Master of Divinity. It's an interesting construct, given the perception that many universities, especially in the Ivy League, are unpatriotic at best and downright Communist at worst. As the wife of a soldier and having been known to occasionally vote for a Republican, I can report feeling a little alone, shall we say, but not terribly.

Yet I always think of this motto when called upon to do one of my least favorite tasks in ministry: signing a marriage license.

I hate it. And each time I do it, I feel like I'm betraying Someone.

The thing is, my primary devotion is to be to God. This means, with regard to marriage, that I need to bless the unions of people who I feel are embarking together on a journey of companionship, devotion and dedication to God, God's desires and God's expectations.

When I sign a marriage license, I'm acting in some capacity as an agent of the State. The government recognizes my authority (even as a religious figure) and allows me to sign off that two people have committed their lives together and, through this act, should receive whatever recognition and benefits come from the State to married people.

I don't want to work for the State. If I had wanted that, I never would have changed my major from political science. (Lo, these many years ago...)

I'm a big fan of the privatization of marriage, but that's a different post.

My issue here is that my job is to consider the spiritual aspect of a union, to encourage a couple as they make promises to one another in front of others, to encourage others to support them in the promises and in this endeavor. My allegiance to God means I might bless couples who aren't recognized by the state as such, even while drawing stricter boundaries around what it means to be committed to one another. The state doesn't care if you forsake all others, God (and, thus, the Church) does.

When the State comes in, then they can say who is really "married" and who isn't.

I don't want to be a part of that.

I'm weak and I've never yet told a couple to go ahead and see a judge for the legal side of their marriage- that I'd cover the spiritual side.

But each time, I press down on those carbon copies, I give a little sigh.

I guess church and state aren't quite separate enough for my taste.

Each day I consider that what I do is for God and I must remember that.

Less often, but still frequently, I consider what it means to be an American and the rights and privileges that entails.

And once in a while, I consider that what I do reflects on Yale. 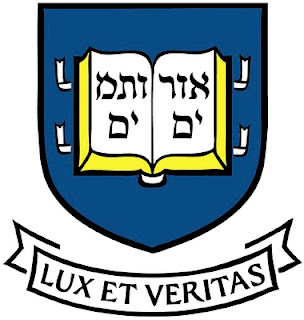