I did not anticipate that this sermon, the one on the return of Christ, would be the hardest to write. When I was planning the series, judgment, heaven, and hell all seemed like hefty theological balls to smack into the stands. The return of Christ seemed like a wiffle ball in comparison: Don’t know when it’s coming. It will surprise us all. Be ready by keeping the faith through loving your neighbor and caring for creation. Voila, let’s eat!

Yet this topic wouldn’t let go of me. I regretted the chosen texts. (Never mind that I chose 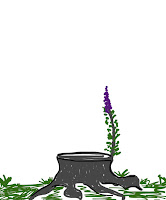 them.) Malachi pushes his hearers into a fearful anticipation of what it to come. The one they anticipate will burn off their impurities and everyone who has done any wrong will have it revealed. Those who hear this are supposed to look forward to this day with hope and dread.

I sometimes visit a Korean spa that offers a full body scrub. (Stay with me here.) You have to soak in a hot tub and then a very aggressive woman scrapes you down with the roughest cloth you’ve ever felt. Your dead skin piles up next to you- if you’re like me. It’s horrible and wonderful all at once and you definitely feel purified- at least skin deep- after it’s over. Is Malachi’s one who is to come going to do this for us- but spiritually and with finality? Is soaking ourselves in the written word and the experiences of community and communion the way of being prepared for this eschatological scrubbing?

Eschatology is the fancy word for the last things or the end things. If you use it too much, it means you’re not focused on the things of right now, which is its own problem to scrub out.

Paul’s first letter to the Thessalonians connects us to some of the earliest followers of Christ. Likely, it is the oldest part of the New Testament. The people receiving the letter wrapped themselves in the good news of Jesus Christ that they heard from Paul. Part of his understanding of that gospel and their take-away was that Jesus was returning soon and very soon (as in he’s just around the corner).

When some of these first believers died, those who remained panicked. How would those who died be able to enjoy what Jesus was going to institute when he came back, which should be in just a few moves on the sun dial. Any moment now… Part of the reason this matters is that the early Christians lived in what historians call the Pax Romana. This was a nearly 200-year stretch of peace achieved by Rome, not because it was actually peaceful, but because Rome had so beaten down its enemies that none had the power to rise against it and break the “peace”.

This did not mean that the surrounding areas, the Roman territories, felt at peace. Local governors and governments had their own discretion and power to wield in local affairs.  Often this passage from Thessalonians is used not only for its “thief in the night” intimidation, but also as a consolation to Christians who worry that they are wrong. Wrong about God, wrong about Jesus, wrong about what it all means. The Thessalonian Christians were among those who hoped Jesus would return, and soon, so that they would know true peace. They would worship without fear. They would see their loved ones again, according to Paul. And they would be able to show everyone that they were right.

The promises of God, however, are not our trump card when our back is against the wall. When rulers say “peace, peace”, but there is not peace, the promises of God are our consolation. The comfort of knowing that God does not lie is not meant to keep us cocooned in denial or ready to say “Told ya so!”, but to break us out in resurrection freedom so that we may take up our baptismal callings, our vocations, our avocations, and be part of the kingdom that come near right now.

The passage from Matthew has been so misused that I’d prefer if we never read it. (Yeah, I did say that.)  Without its surrounding passages, it means nothing. Pulled from the context of Matthew’s “Little Apocalypse” or revelation, the gospel writer is explaining to the disciples what it means to faithful. In Matthew, there are only either/ors, this or that, goat or sheep. Period. For this writer, the disciples are either keeping the faith and are among the elect or they are not. End of story.

This call to righteous living has been manipulated to point toward a “rapture” that has its own theology of discipleship around it. When we have stories that are not centered in Christ, that are not anchored in grace, that do not point to the on-going, merciful, inviting work of the Spirit, or do not fit with God’s eternal character of creation and creativity, then these stories (including the rapture, the tribulation, and all their fabled friends) cannot be part of our way of talking about faith and faithfulness. Matthew’s entire gospel is a guide to those who have found themselves outside of the place they once called home and now need to form a new community. Matthew is writing for spiritual refugees.

The fancy theological word for the return of Christ is “parousia”, meaning presence or arrival. When I think of the parousia, I think of my junior year of college. I was a transfer student, so this was my first year in this school. I noticed the girl who sat behind me in Italian did not come to class for two weeks and this was after the drop period. Not coming meant either she left the school or was planning to fail the class.

I did not know many people, but she had been friendly to me. I called the office and found out where she lived in the dorms. I made some brownies and went to make a call. I found her in her dorm room, alone and lonely. She’d decided to attend this formerly Baptist women’s college because it was where her girlfriend wanted to go. Two months into their first year, they broke up. The girlfriend had moved out of their room and, being the more social of the two, had taken most of the friends.

The tearful girl in front of me looked at me and waited to see what I would do. I wasn’t prepared with a good speech. I didn’t come from any church tradition, family practice, or even friend history that gave me a script for what to say the first time someone told me that they were gay and then cringed to see how I would react. Then the parousia happened. My dad’s refrain of “You know what’s right. Do it” played in my head, overlaid on a soundtrack of every hymn about welcome and grace and hope and love I’d ever sung or heard. Here is how the parousia happened: Deep breath, “Okay. Want some brownies?”

This arrival, the return of Christ, is not just far off. If the body of Jesus wouldn’t stay dead, wouldn’t stay entombed, and wouldn’t bother to only speak to the upstanding in the religious community, how can we believe that the spiritual presence of that body will be contained merely to a future date and time. Surely there is a both/and reality that would make the writer of Matthew go wild, but it cannot be denied. Christ is present and Christ is coming. God created and God is creating. The Spirit resurrected and the Spirit is resurrecting. The return of Christ is coming and the return of Christ is here. In our conversations, in our baptisms, in our communion, in our dark nights of the soul, in our singing of “Joy to the World”, in our brownies, in our learning, in our repenting, in our life, and in our death.

Embracing the return of Christ as the mystery that it is means letting go of the false gods of bad theology, releasing our fear of hell, rejecting heaven as a prize that we can earn, and realizing truth of the presence of Christ in, with, under, and for us and all creation at all times and in all places. Furthermore, embracing the return of Christ as the most concrete reality of our sermon series forces us to reject spiritual complacency. We must embrace the tangible things that draw us together as a congregation and push us out toward community. These things, from water and wine to sandwiches and books and peanut butter and Christmas stockings and bible studies, are clues. They are clues that point to mystery of how the Savior of the world can be as close as our hands.

Christ has died. Christ is living. Christ will come again. And he does.

Posted by Pastor Julia at 3:27 PM No comments: