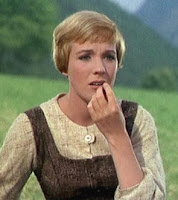 I don't get to watch that much tv anymore, but I actually wrote today's Oprah show down on my calendar. Why? Because she is hosting a Sound of Music cast reunion!!! Those of you who know me may be surprised that I would care so much about such a stereotypically girly flick, but I love it (although admittedly fast forward through the Reverend Mother's rendition of Climb Every Mountain). I can watch this movie over and over and over again.

It seems no matter how many new movies, tv shows or books come down the pike I still have my ol' stand by favorites that I can watch/read over and over and when I do they actually bring me comfort - like an old sweatshirt or a favorite food.

Today's Friday Five is an opportunity for you to list five of your favorite 'go-to' movies/tv shows/books.
This is an interesting Friday Five for me because I just went, with my mom, to a Sound of Music sing-along. Revisiting that movie was interesting, but less comforting this time in seeing in newly re-digitized, big screen color. Suddenly the love story seemed less obvious and the national troubles in the background took more of my attention. On to my comfort media:
1. A Prayer for Owen Meany (John Irving) This story of a boy who knows exactly when he will die and thinks he knows never fails to evoke something new and deep in me. The theological, psychological, sociological, illogical aspects of this book all conspire to keep me from sleeping until I've finished it. Again.
2. A Walk in the Woods (Bill Bryson) Bryson's dry wit and self-deprecating humor make me smile. This is my apple-pie of books. I know exactly what it will be and I like it like that.
3. Little Women (1994) Ah, Gabriel Byrne- making Professor Bhaer hot for 16 years and counting. Love this soundtrack, casting, costumes, everything. I could never love anyone as I love my sister... or anything as I love this movie.
4. Mamma Mia (2008) Honey, honey, how it thrills me. (Uh-hunh, uh-hunh) You may think the plot is lame, the singing weak and the whole venue beneath Meryl Streep, but when it comes to feel-good movies, this tops my list. The fact that I can sing along... well, that's just a bonus. The great Greek scenery- a little whipped cream. A chorus of toned and tanned men in Speedos and flippers- the cherry on top!
5. Dave Barry's Book of Bad Songs (Barry) I'm giggling even thinking about it. I cannot fail to read this book without tears coming to my eyes from squelched laughter. I even have funny memories around reading this book, including the time I read it in sushi bar and the three sushi chefs sang "Knock Three Times" to me.
Bonus: Come Ye Disconsolate (my comfort hymn) I think the title says it all.
And your five?
Posted by Pastor Julia at 6:03 PM 3 comments:

The story of the healing of Naaman has lots of interesting details. The first is that God had given victory to him, as a leader of the Aramean army. It’s important to understand that victory for Naaman would have meant defeating Israel, God’s chosen people. At this time, it would have been understood that the victors of a battle had God’s favor and the losers did not.

- 1. If Aram had not defeated Israel, it is likely that Naaman would never have heard of Elisha. (One possible interpretation of this is that God was always, even prior to Jesus, trying to bring people into the fold of grace.)

- 3. The Jordan was muddy river, barely a trickle in some areas, but the rivers of Damascus were faster, flowing clear streams. The idea of bathing in the Jordan seemed abhorrent and counterintuitive.

- 4. Having been warned often about the “easy” way, we often make things much harder for ourselves then they need to be. We often avoid conversations and tasks that aren’t that difficult precisely because we’re afraid of how easy they seem.

Why does Naaman want to take two wagonloads of dirt back to Aram with him? What’s he going to do with two loads of dirt? The belief of most people during this time, around the Mediterranean region, was that the spirit of a region’s god rested in the soil there. Naaman is going to devote himself to the God of Elisha, the God of the Israelites, so he believes he needs enough of the soil to be able to have a hefty amount of the Spirit available to him and enough land on which to put a small altar or shrine.

In his eagerness to worship the God who cured him, Naaman is going with what he knows, which is that the dirt must house the God. The idea of a God who is bigger than the land, bigger than the sea, a God of all- that is beyond Naaman’s imagination. So he reduces, so that he can understand.

We often do the same thing. Because we are descendants of Naaman, we are a visual people, a tactile people. We need things to cling to, concrete items. The church, the stained glass, the paraments, the printed Bibles, all things to help us with our faith- to connect us to God. In fact, the reason we have water at baptism and bread and wine at communion is precisely because we need earthly elements. We need those concrete things and the concrete images of washing and nourishment, so that we have something to which we can attach God’s promises. Otherwise our best intentions go floating off into the ether.

Naaman could have left after Elisha refused any payment. He could have left with the best intentions of continuing to worship the God of Israel. But what would have happened a week later, when he slept in? Or a month later, when he was on troop maneuvers again? He would have forgotten, told himself that he would do it later, felt guilty and then gotten into that bad cycle of “Now I am so far behind, it would be embarrassing to try to correct it.”

In the same way, it’s the work of our faith, and I mean the labor of our faith, not to make the objects that inspire our faith what we are worshipping. Not the dirt, or the water, or the bread, or the peace and quiet or the rush of wind, not the healing or the peaceful death, but God and God alone deserves our thanks and our praise.

That’s the function of the Creed and the Prayers in worship. Words that do not come from us, but are familiar. Words that speak to our faith, draw us out of our own understanding, push us to the limits of what we believe could be true and then we dare to ask for more.

The depth of the Creed, the heartfelt nature of prayers, help us to realize that we believe in a God who cannot be contained in earth. A God who forgives us when our best intentions fall short. A God who commands us to pray, helps us with that prayer and takes those prayers to heart.

Naaman took two carts of dirt back to Aram, to remember his gratitude and to worship God. We use earthly elements and ancient words to do the same thing. To help us to stop, to thank God and to remember that the faithfulness of Christ has made us whole.

Posted by Pastor Julia at 2:45 PM No comments: