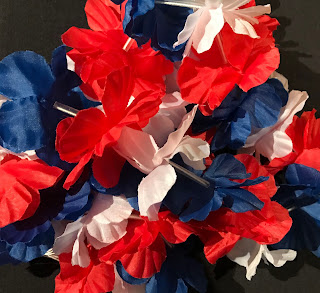 A few days ago, I was driving down a busy Anchorage road with both my kids in the car. I glimpsed something in my lane up ahead and tried to make sense of what it was. As part of my brain registered that it was a crumpled American flag in my lane, the other part of my brain began to scan for where I could safely pull off and grab it, before it was run over, soiled, further disrespected.

I have not said the Pledge of Allegiance in years. I remember clearly the curious looks I got for standing with my hands by side on my son's first day of kindergarten, silent while everyone else recited along with the principal over the intercom. I love to sing and the American national anthem is great for a soprano who wants to pretend she's Beverly Sills, but I stay quiet. My relationship to my country is not my greatest allegiance and I've pledged everything I've got to the One Who Loved Me First.

Due to my activism, my efforts to bring change on a variety of levels of society, to what people are sure they know about my politics... (Just a week ago someone mentioned assuming everyone in a group was registered as voters for a certain party- I'm not registered with any party.)... due to what people see and hear from me, assumptions are made. For most of those doing the assuming, it is an impossible idea that I would be found sprinting down the sidewalk toward a crumpled American flag, hoping to reach it before the situation was any worse. Yet there I was.

When I was about 50 yards from the flag, a man sprinted across several lanes of traffic from the other side of the road and snatched it up, rescuing the cloth itself from additional ignominy. And I returned to my car, panting, trying to figure out how to explain to my children why their mom was suddenly possessed with a frantic need to rescue a particularly patterned fabric from the street.

I barely understood the frantic need myself.

I wanted to save my own hope in the flag as a symbol of what this nation can be and could be.

I wanted to show my children that you can be deeply frustrated and disappointed and still faithful.

I want to continue to have the hope of General Lafayette in the "perpetual union of the United States" that it may "one day save the world".

Inside me, beyond how impotent I feel, how grieved, how desperate, how revolutionary, I believe there is a soul of an idea of who the United States can be that seeks to repair the wounds of the Doctrine of Discovery, to heal and repent of the on-going injury of enslavement, racism, and white supremacy, that truly embraces the concepts of equality and equity relative to justice, access, and opportunity.

It is a sign of high privilege that I can even entertain that notion.

And, yet, I know that I am an Esther among Esthers, an Abigail among Abigails, a Huldah among Huldahs, a Priscilla among Priscillas. I am not alone in the work or the call or the disappointment or the anger.

I will resist the efforts to cave and accept oppression, silence, complicity, lies, or misdirection as normal, representative, or necessary.

And I will hope.

And, if I have to again, I will sprint down a sidewalk along Tudor Road on a Monday evening, to rescue a tangible symbol that is more than history; it is possibility. It is that possibility that my Truest Allegiance will not let me ignore.
Posted by Pastor Julia at 7:35 AM 3 comments:

40 M&Ms from the Galatians

It is my father's belief that people understand history best if they know how they are connected to it. Thus, he used to explain that he knew his grandparents who had been born near the turn of the 20th century. The oldest people they would have known would have remembered the time before the American Civil War. The oldest people they knew when they were children might have remembered the presidency of Andrew Jackson or the War of 1812.

Thus, because of my dad, I think of time in 50-year stories. I know someone born in 1954. If that person knew someone born in 1904, we've covered a century of knowledge. I'm only a time collapse away from a person alive before the Wright Brothers flight at Kitty Hawk.

At confirmation, the other day, the kids and I did a little math.

Let's say Paul's letter to the Galatians (the frontrunner for being the oldest text in the New Testament) is circa 50 A.D./C.E.

I had the confirmands set out a row of 40 M&Ms or Skittles from them across a table. Those 40 M&Ms are forty life stories that are between us and Paul's letter to the Galatians. While there might not actually be a straight line between any of us and that group, there is a direct line of narrative and spiritual inheritance from the Galatians to us (contemporary travelers on the Way of Christ).

I find that amazing to consider. We are 40 generations from Paul, 40 M&Ms between us and the birth of people wrestling with what it meant to be counter-cultural in the Roman Empire. (In Christ, there is no Jew nor Greek, slave nor free...) There's less than a full Skittle between the Galatians and the life of Jesus. We are 10 Skittles from Martin Luther and he's 30 M&Ms from Paul.

And all of this is a blip when we consider that we are contained within the kairos of Divine, Eternal Love. Chronos means chronological or sequential time, whereas kairos is a reference to an open space in time that create opportunity and right moments. All our M&Ms are provided contained within God's own self and God's own time.

I realize that this way of thinking about time is a little abstract. Yet, it was moving to see 7th and 8th graders contemplate the reality that there are 40 life stories (and more) between them and the writing of the oldest book (a letter) in the New Testament. They reported thinking of everything in the Bible, including, Jesus as long, long ago and far, far away.

The truth is the brown-skinned Jew from Palestine is closer than we think. And his first witnesses are only 40 candies away.