Revelation 6:15-17 Then the kings of the earth, the officials and the generals, the rich and the powerful, and everyone, slave and free, hid themselves in caves and in the rocks of the mountains. They called to the mountains and the rocks, “Fall on us and hide us from the face of the one seated on the throne and from the Lamb’s wrath! The great day of their wrath has come, and who is able to stand?”

Who is able to stand? 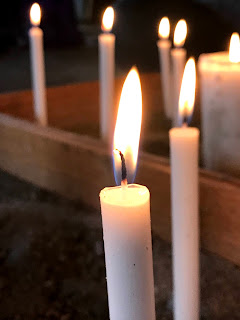 It’s a fair question. In the vision of the Revelator, six of the seven seals have been opened. Famine, war, pestilence, and death have spread through the earth. All of the natural worlds are acting unnaturally. And then- the kings of the earth, the officials and the generals, the rich and the powerful, and everyone else- enslaved and free- hides from what is happening, and they cry out to the mountains and the rocks- who is able to stand?

They cry out to the mountains and the rocks, perhaps, because these entities are unmoved by all that is happening.

They cry out, “Who can stand?”

Then, there is a pause in the action, a pause before the opening of the seventh seal, a pause where the four angels of the four corners of the earth are seen to be holding back the elements for the protection of creation. This pause holds, the Revelator is told, until the angels have marked the servants of the Lord with a seal on their foreheads.

Then comes the accounting of the tribes of Israel (Rev. 7:1-8), to whom God has kept and will keep the Divine promises. God’s promises are true and God’s covenant-keeping is an encouragement to us, even when the covenant was not made with us. All reminders of God’s faithfulness are good for our souls.

After that section, the Revelator sees a great multitude, so many people he cannot begin to count them. He cannot even estimate them. Furthermore, they represent all tribes and peoples and languages. What always strikes me is that the writer of Revelation is likely from Asia Minor. If he has spent time in Rome, particularly in a Roman prison, he can recognize where people are from. Yet, we do not get a list here of countries known at the time. It occurs to me that the writer may genuinely be seeing, in this vision of the Divine realm, people of nationalities he has never seen before. He is hearing languages he has never heard before. There are tribal outfits and markings beyond his experience or comprehension.

And, in a reversal of the scene around the Tower of Babel (Genesis 11), all of the different peoples are united in their different languages to praise God. Here we have some of the most familiar liturgical language from throughout church history. It is not put in the mouths of the apostles or the church leaders from Acts. It is not Paul telling it to us or an early church historian explaining it.

The writer quotes these words, these hymn fragments, in the mouths of people from all nations, tribes, and languages- noting that the scene around God’s throne, the culmination of God’s promises kept, the future of the redeemed is truly more than we can imagine. And at the very least we need to be prepared to be there with people we did not expect to see and who, maybe, didn’t expect to see us.

It is important to note that the elder who speaks to the Revelator does not say that this multitude is gathered around the throne because they came through the tribulation. That they experienced the economic, social, political, and physical oppression of the Roman empire is part of their history, but that is not what brought them to the throne.

They are surrounding God’s throne because of the sacrifices of the Lamb of God, Jesus the Christ, and it is his love alone that brings them there. They came through their ordeal by trusting in his word above everything else. Every ruler who promised to save them, every cultic practice that seemed helpful, every community expectation around false idols and religious habits- this multitude resisted and worshipped, instead, their Creator.

Even as they worked, worshiped, had families, celebrated, and grieved- God was the center of their lives. Similar to those whom Jesus lists in the Sermon on the Mount (Matthew 5-7), these people were not suffering to be blessed, they were blessed because they suffered as they chose a life that put God first.

Let me say again, the multitude did not suffer to be blessed, they are counted as blessed because they suffered in doing what Jesus asked of them- loving God with their whole hearts and their neighbors as themselves.

If there are more people than the Revelator can recognize, then there are people who are not Jews and who are not from Gentile groups he knows. Some people may yet have been outside the spread of the Gospel as we know it and yet who were known to God. God decides who is in this multitude, God draws them forth, God chooses to bless them. The wideness in God’s mercy is not for us to boundary.

On this day, we remember our loved ones who have already been received in that place in peace. We carry the pain of missing them, which is real and should not be judged or downplayed. We also carry the hope of reunion with them.

What would it be like, I wonder, to imagine their hopes for us? Not the ones they spoke in this life, but the ones they may have now- given what they know that we as yet only take on faith.

In our present time of frustration and division, how might they advise us from that multitude around the throne?

In our present time of change and uncertainty, how would they encourage us in turning away from idols who make promises to us that are not theirs to make and which cannot be kept?

In our present time of injustice and unrighteousness, what story would they tell us about their present experience that would help us to center the love of God and neighbor in our everyday lives?

Revelation is not merely a vision of what is to come. The entire purpose of apocalyptic literature is an unveiling of how God is at work in present troubles and how to remain faithful in those same difficulties. We cannot read Revelation as something that happens eventually but as a vision of what was true and encouraging for the early church and what is true and encouraging for us.

The kings of the earth, the officials and the generals, the rich and the powerful, all people- enslaved and free- look at what is happening throughout the earth and ask, “Who can stand?”

The ones who believe in Jesus, the ones who seek to comfort mourners, to bring peace and justice, the ones who hunger and thirst for righteousness, the ones who renounce the forces that oppose God, and resist making spiritual mountains out of earthly molehills-

These ones, we, may still suffer, but we know that it ends with being comforted and with every tear wiped away from our eyes.

Hosanna! Save Us! (Sermon, Palm Sunday)

April 01, 2012
The premise of this sermon begins with the fact that the service was "backwards" for April Fools Day. We began with a benediction, flowed to communion, back through the service, concluding with confession.  Mark 11:1-10             How do I give a sermon backwards or upside down? Do I begin with the point I would close with and close with a pointed story? I’m not sure. On the best days, the Spirit works through the sermon to give us the food for thought and the faith that brings us to the table to receive, and commune with, the presence of Christ. Since we communed first today, I’m trusting that the communion that is in us and among us… is also opening us up to a new way of looking at this holy Sunday… Palm Sunday.             Today’s gospel lesson is usually called the “Triumphal Entry into Jerusalem”. What makes it triumphant? -        The people greeting Jesus? -        Like a parade? -        Treating him like a king? The crowd is sho
Post a Comment
Read more

The Prayer of the Trees

June 13, 2015
A prompt from Rachel Hackenberg : From the prophet Ezekiel: Thus says the Lord GOD: I will take a sprig from the top of a cedar; I will break off a tender twig from its uppermost branches and plant it on a high mountain. There it will grow into a noble cedar, producing branches and bearing fruit, and under it the creatures will burrow and in its shade the birds will nest. Then all the trees from field to forest will know that I am the LORD, who makes low trees tall and who cuts low the highest tree, who dries up the green trees and makes the dry trees flourish again. I am the LORD; I will do this.  (Ezekiel 17:22-24, adapted) Imagine the praise of the trees in the fields and the forests! Imagine the hope of the dry trees and the trembling of the tall proud trees! Imagine the prayer of the cedar sprig, newly planted and striving to grow! Breath of my breath and Core of my Being You made all things.  You know my weaknesses and my faults- The improper lines, the t
Post a Comment
Read more