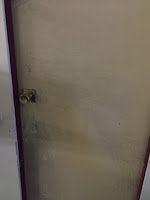 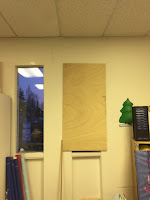 Early on Friday morning, January 29, 2016... a person or persons broke into the church building where I serve.

They smashed a concrete doorstop through a window to enter the building. Additionally, they threw said doorstop through the plate glass office window and then ransacked the office looking for money. Not finding any, they stole a small, inexpensive digital camera and tore up the office.

They proceeded to the sanctuary where they overturned the baptismal font, shattering the pottery insert that protected the brass font from water damage.

The saddest damage was found on Sunday morning, where they wrote in the liturgical leader book. 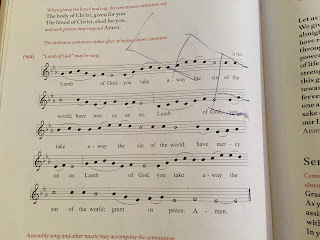 Right over the idea that the Lamb of God takes away the sin of the world, they wrote "lie". Did they stop to read this and react to that specifically? Do they refuse to believe the body and blood of Christ were given for them? Did they simply not care what the book was?

There was no other damage to the book or in the sanctuary (besides the font). No Bibles torn, no hymnals, nothing to the piano or organ (thank God). So this quick writing seems very specific.

The worst damage was in the back of the church where they put books and papers on the stoves and turned on all the burners full blast. We have had electric stoves, so it probably took a while for things to start burning, but they did. Eventually the sprinkler system kicked in and one localized sprinkler dowsed the flames. Lots of water pouring through the kitchen and over some of the preschool contents. The kitchen was totaled. 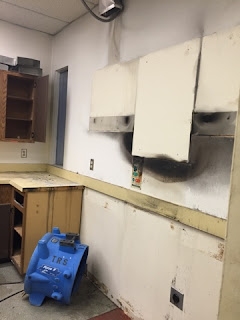 A person walking his or her dog early in the a.m. saw the strobe lights of the fire alarm system and called the fire department. The alarm system alerted specific church members.

It was, expectedly, chaotic.

We're slowly cleaning up and deciding how to move forward.

The emotional reactions come and go, but when I look at the worship book, there's only one spiritual reaction: prayer for such a hurting individual.

In ransacking the office, they opened a plastic bowl I had full of ashes. Last year, I burned 3 years worth of old palms from Palm Sunday. I sieved the ashes very finely and stored them. I had enough ashes for about 500 Ash Wednesdays. The person opened that container and dumped the ashes everywhere in the office. The ash is so fine, it just hangs in the air.

This means that the perpetrator, still a child of God, left Lutheran Church of Hope covered in our still ringing "Hosannas" (God save us!) and the reminder that we are all dust and to dust we shall return.

There's something so poignant about that. I'll try to cling to this as we move forward.


Donations to Lutheran Church of Hope or Hope Lutheran Preschool may be made here: www.mkt.com/hopeak.
Posted by Pastor Julia at 1:43 PM

Our love, prayers, and support go out from all of us at St. Mary's, to all of you at LCOH.

We stand with you in this time, and stand ready to help in any way we can.

Grace and Peace to you all,

Buildings and materials can be replaced....People can't. Prayers for quick repairs to the church and emotional healing for the congregation.
Wish I were there to help.
God's blessings to all. Hugs❤

St John UMC continues to lift our sisters and brothers, LCOH, in prayer, as well as the perpetrators.

Our hearts are broken with yours for this destructive violence, but we give thanks that we worship a God who specializes in raising new life from ashes.

We are with you on this journey.

Rev. Andy Bartel
and the people of St. John UMC